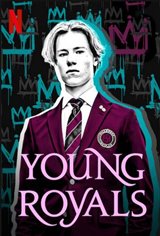 After getting into trouble, Prince Wilhelm (Edvin Ryding) enrolls at a prestigious boarding school to make amends with his family. The school is called Hillerska and it teaches privileged youth to adopt proper routines and company over the course of three years.

As he struggles to adjust to his new life, Wilhelm navigates the complicated scene at Hillerska in the presence of other modern royals. Soon enough, however, the young prince’s old habits return as he falls into a new cycle of partying and drama. Wilhelm’s life only gets more complicated when he develops feelings for another young man, discovering that following his heart might be more challenging than he anticipated.