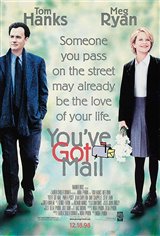 Watch Trailer
You had to know it was only a matter of time before Tom Hanks, Meg Ryan and Nora Ephron were reunited for another attempt at recreating the success (fourth highest grossing movie of 1993) of their previous teaming-up -- Sleepless in Seattle. Well, here it is.

This time out Hanks plays Joe Fox, the executive of a large chain of mega-sized bookstores whose latest outlet is about to open up across the street from a small children's bookstore owned by Kathleen Kelly (Ryan).

Afraid of losing her very livelihood, Kelly detests Joe and the Wal-Mart, Chapters, bigger-is-better corporate, consumer culture he represents. But, unknown to her (and to him), this is the same man she has been having anonymous electronic conversations with on her computer that have become -- for both of them -- wonderfully engaging and romantic.

This is actually a remake of the 1938 Ernst Lubitsch comedy The Shop Around the Corner, and the earlier play Parfumerie.