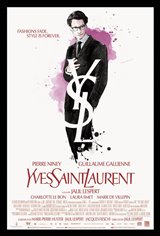 A dramatization of the life of French designer Yves Saint Laurent from the beginnings of his career in 1958, when he found himself at 21 the head designer of the House of Christian Dior S.A. His debut collection is credited with saving the business and catapulted him to international stardom.

However, he experienced criticism when his second collection was launched, which brought much angst into his life. The film also details his private life and his relationship with his lover and business partner, Pierre Berge.