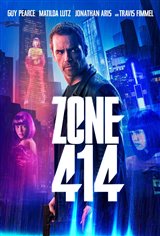 Zone 414 is a dangerous colony of humanoids known as the city of robots. The colony's creator hires private investigator David Carmichael to track down his missing daughter. David teams up with Jane, an advanced AI equipped with the same technology as its fellow humanoids, but with all the emotions, feelings and dreams of a human being. They travel throughout the metropolis, uncovering clues and a crime that calls into question the origins and true purpose behind the city of artificial humans.