ALL THEATRES ARE CLOSED UNTIL FURTHER NOTICE, DUE TO COVID-19.
Celebrity Gossip > Bosworth’s dress malfunction 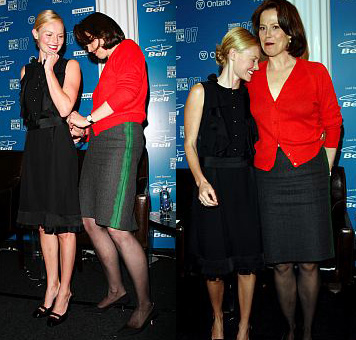 Towards the end of the Toronto International Film Festival press conference for her new film, The Girl in the Park yesterday, Kate Bosworth‘s dress sprang open. Prior to that, everything had been going smoothly, with Bosworth saying her shooting experience, “To be able to explore emotions as deeply as I did, and have a partner in Sigourney who made me feel so safe, was a very therapeutic thing for me.” Co-star Signourney Weaver then came to the younger actress’ rescue when Bosworth stood up for the cameras and the back of her dress fell open. Bosworth giggled as co-star Weaver, trying to keep a straight face herself, tried in vain to do up the clasps. Bosworth finally left the conference holding the back of her dress together. For more news and gossip from the Toronto International Film Festival, click here.