The 32nd Annual Razzie Awards were held in California on Sunday to honor the worst movies in Hollywood. This year, Adam Sandler's Jack and Jill made history, taking home awards in every single category. It not only won a Go... 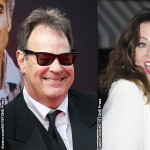 Adam Sandler has been named the most over-paid actor in Hollywood.The 47-year-old comedian, whose recent films ‘That’s My Boy’ and ‘Jack & Jill’ were labelled flops, is reportedly no longer popular at the box office despite earning huge pay checks…

Adam Sandler may possibly be the most annoying celebrity on this list. In his movies he often plays the same dumb character — a goofball (usually who lisps). Check out his movie Jack and Jill for a doubly annoying dose of S...

The 32nd Annual Razzie Award nominees were announced  just one night before movie fans and connoisseurs sat down to watch and honor this year's best pictures and actors at the 84th Academy Awards. This year Adam Sandler domi...

The 33rd Annual Razzie Awards took place this weekend in order to spotlight Hollywood's worsts of 2012. Twilight Saga: Breaking Dawn - Part 2 came out on top and was the big winner, technically the big loser. Unlike last year...

Tom Cruise embraces his inner rock star, while wife Katie Holmes seeks her inner groupie. The star of the new musical, Rock of Ages, shocked fans with his new attire – or lack of attire – and Holmes loves the style. “Ka...

The Twilight Saga: Breaking Dawn - Part 1 enjoyed the second highest opening of the year, just behind the final instalment of the Harry Potter series, grossing an estimated $139.5 million (all figures U.S.), making it the fif...

The new action adventure Immortals garnered the top spot at the box office this past weekend, grossing an estimated $32 million (all figures U.S.), knocking out two-time champ Puss in Boots and -- despite a lack of A-list sta...

Puss in Boots: Behind the Scenes – Part 2

In Puss in Boots, Antonio Banderas gets to head up his own adventures after standing in Shrek's shadows for so many years! This time Puss meets up with  rivals Jack and Jill, voiced by Billy Bob Thornton and Amy Sedaris,   ...