Sanctum – A Look Inside

The cast and crew of Sanctum give us a first look at their new 3D underwater thriller.... 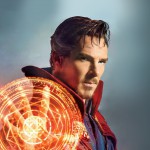 It has been confirmed that Benedict Cumberbatch’s Doctor Strange will join forces with Chris Hemsworth in this year’s Thor: Ragnarok. Check out the story for details.

Audience attendance at theatres was down due to the Super Bowl, but the new thriller The Roommate topped the slow weekend box office with an estimated take of $15.6 million (all figures U.S.), earning a rating of 3.7 out of...