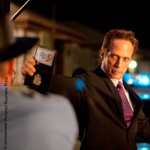 Like many actors, William Fichtner got his start in soap operas. On the little screen, you may have seen him in Entourage as Phil Yagoda, Invasion as Sheriff Tom Underlay or in Prison Break as Alex Mahone. On the big screen, ...

Synopsis: In this version the four mutant turtle brothers are created in a laboratory as heroes, defending the city from intruders and threats. The four ninja trained turtles—Michelangelo, Raphael, Leonardo and Donatello—...

Johnny Depp fans can check out his latest flick alongside The Social Network's Armie Hammer in The Lone Ranger, a wild west movie featuring some of the best action scenes this year. Set in 1869, Hammer takes on the lead role ...

Phil (Steve Carell) and Claire Foster (Tina Fey) are a sensible, loving couple with two kids and a house in suburban New Jersey. The Fosters have their weekly "date night"—an attempt at re-experiencing the spice of the date...