Just weeks after the two began dating, Aaron Eckhart has broken it off with model-turned-actress Molly Sims, reports Starpulse. Last month, rumors of a romance began to circulate when the two were spotted dining together in Baton Rouge, Louisiana.  The actor was in town to film Battle: Los Angeles. A few days later, while promoting her jewelry collection on the Chelsea Lately show, Sims confirmed to television hostess Chelsea Handler that she and Eckhart were an item. However, Eckhart has already ended the romance, and Sims confirmed the news, adding that the actor dumped her over the phone. A source added, “He’s an incredibly private guy.” ~Patricia Gougeon

Molly Sims has given birth to a boy.The 39-year-old actress and her producer husband Scott Stuber – who tied the knot in September 2011 – welcomed their first child yesterday (19.06.12), according to Us Weekly magazine. The baby weighed just over 7lbs… 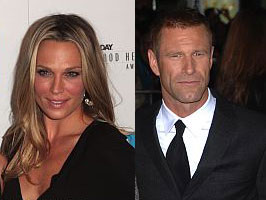