The 94th Academy Awards are here! We’ll be updating over the course of the evening as the winners are announced — a full list will be available once the ceremony comes to an end.

This year’s Academy Awards opened with tennis stars Venus and Serena Williams, whose beginnings as athletes were portrayed in the movie King Richard. They introduced a video featuring Beyoncé singing the Oscar-nominated song “Be Alive.”

Hosts Wanda Sykes, Amy Schumer and Regina Hall were then introduced. Schumer joked that the Academy hired three women to host because it was cheaper than hiring one man. They riffed on how hard the pandemic was on everyone, pointing out how much older Timothée Chalamet looked (as the camera focused on J.K. Simmons). Sykes said about Netflix’s The Power of the Dog, “I watched that movie three times, and I’m halfway through it.” Schumer quipped that Leonardo DiCaprio had done so much to fight climate change — in order to save the planet for his much-younger girlfriends. Hall did a sketch in which she called up a number of hunks (Bradley Cooper, Timothée Chalamet, Tyler Perry and Simu Liu) to the stage so she could further “test” them for COVID.

A touching moment of the evening was when Troy Kotsur gave an emotional speech using sign language when he won Supporting Actor for his role in CODA. He spoke of his father, who he said was the best signer in his family, until he was in a car accident that left him paralyzed from the neck down. Kotsur is the first deaf male actor to win an Oscar. The first deaf female actor to win an Oscar was his CODA co-star Marlee Matlin in 1987 for her role in Children of a Lesser God.

In one of the most shocking moments in Oscars history, Will Smith got up out of his seat and walked to the stage to angrily slap Chris Rock across the face after the comedian joked about Smith’s wife, “Jada, I love you, G.I. Jane 2, can’t wait to see it,” apparently referring to Pinkett Smith’s bald head. Smith was even seen laughing at the joke, which made his walk to the stage even more surprising. After sitting back down, Smith, obviously livid, shouted — although the sound was shut off by censors during the exchange — “Keep my wife’s name out of your f***ing mouth,” as Rock looked utterly shocked. He eventually continued on with grace, presenting the Oscar for Best Documentary, but the evening was never going to get back on track.

Schumer brought some levity back to the ceremony later on when she said she’d been getting out of her Spider-Man costume from a gag earlier in the night and asked, “Did I miss anything? There’s like, a different vibe in here.” But really, nothing could distract the audience from Will Smith’s violent outburst and subsequent win for Best Actor in King Richard when he gave a tearful speech in which he cried and apologized to the Academy — but not to Chris Rock.

To give out the final award of the night, Oscar winners Lady Gaga and Liza Minelli came onstage and announced the name of the Best Picture winner — CODA. The film won all three of the categories in which it was nominated. ~Alexandra Heilbron

Actor in a Leading Role
WINNER: Will Smith, King Richard
Javier Bardem, Being the Ricardos
Benedict Cumberbatch, The Power of the Dog
Andrew Garfield, tick, tick…BOOM!
Denzel Washington, The Tragedy of Macbeth

Adapted Screenplay
WINNER: CODA
Drive My Car
Dune
The Lost Daughter
The Power of the Dog

Cinematography
WINNER: Dune
Nightmare Alley
The Power of the Dog
The Tragedy of Macbeth
West Side Story

Documentary Feature
WINNER: Summer of Soul (…Or, When the Revolution Could Not Be Televised)
Ascension
Attica
Flee
Writing With Fire

Documentary Short Subject
WINNER: The Queen of Basketball
Audible
Lead Me Home
Three Songs for Benazir
When We Were Bullies

International Feature Film
WINNER: Drive My Car
Flee
The Hand of God
Lunana: A Yak in the Classroom
The Worst Person in the World

Original Song
WINNER: “No Time to Die,” No Time to Die
“Be Alive,” King Richard
“Dos Oruguitas,” Encanto
“Down to Joy,” Belfast
“Somehow You Do,” Four Good Days

Production Design
WINNER: Dune
Nightmare Alley
The Power of the Dog
The Tragedy of Macbeth
West Side Story

Short Film (Live Action)
WINNER: The Long Goodbye
Ala Kachuu — Take and Run
The Dress
On My Mind
Please Hold

Sound
WINNER: Dune
Belfast
No Time to Die
The Power of the Dog
West Side Story

Visual Effects
WINNER: Dune
Free Guy
No Time to Die
Shang-Chi and the Legend of the Ten Rings
Spider-Man: No Way Home 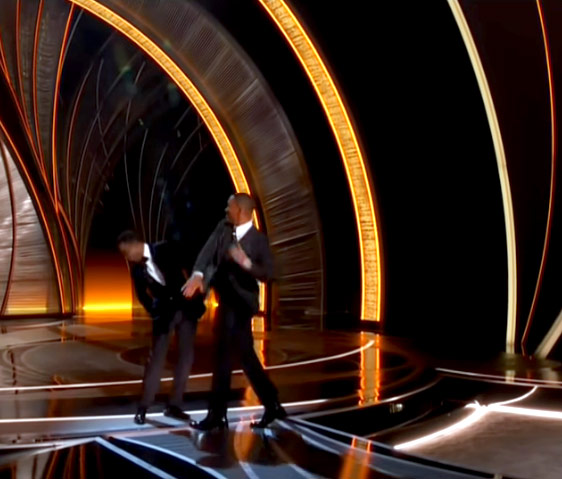