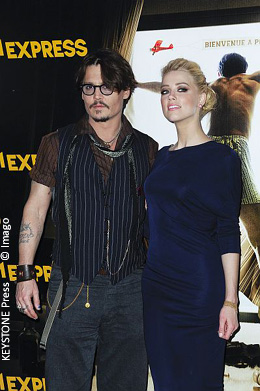 It has just been reported that bi-sexual Zombieland actress Amber Heard broke up with her girlfriend of four years, Tasya van Ree. As we all probably know by now, Johnny Depp and his partner of 14 years Vanessa Paradis have also called it quits recently. Rumors of a romance between The Rum Diary co-stars, Depp and Heard, have been swirling for months. Some sources speculate an affair took place between the two stars and this is what’s to blame for Depp ending his relationship. The two have been seen taking a trip on Depp’s private plane and he recently gave the young actress a horse as a gift. Heard hasn’t been quiet about her admiration for her co-star, saying in an interview that working with Johnny was the best experience of her life. Now that both of these stars are single, who knows if a romance will spark between the two? Maybe it already has. ~Stacy Raivich