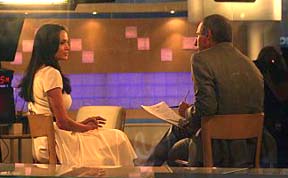 The head count is at six now, but Angelina Jolie says she wants even more children. Today Show host Matt Lauer asked her on Thursday’s episode, when she made an appearance to promote her new movie, Changeling: “You’ve talked about having more children, adding to the group? Have you considered adopting again?” Jolie nodded, so Lauer pressed on, asking: “Do you have anything in mind?” She replied “Yeah,” so he kept up the interrogation with: “Is it something you’d do soon?” Jolie finally said, “It depends. You can’t even start the process until any new children are six months old, to understand how the new family has settled to see what you could absorb into a new family.” Okay, let’s do the math. Angie, who at 33 gave birth to twins three months ago, has been collecting/giving birth to children for the past seven years. That’s almost one per year. If she continues at that rate she’ll have 12 by the time she’s 40. And who’s to say she’ll want to stop there? Some women keep having/adopting children well into their 50s and beyond. Angie (and child-making partner Brad Pitt, if he’s still around), could have 20+ by then. At any rate, as two of the richest celebrities in the world, they’ll definitely be able to afford all the nannies they’ll need, in case you’re wondering who’s going to take care of that many kids when mom and dad are filming.