Celebrity Gossip > Anne Hathaway wants to be like Jessica Chastain 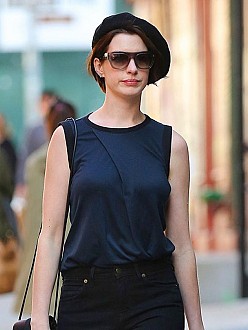 Anne Hathaway wants to be more like Jessica Chastain. The 32-year-old actress says her New Year’s resolution to be more like her low-maintenance Interstellar co-star and she refuses to go on a diet before the Oscars next month.

Anne explained: ”In 2013, Jessica Chastain and I were both nominated [for Oscars] together. I remember we were both at a luncheon before it started, and I was sitting next to her and I asked her: ‘So what’s the first thing you’re gonna eat Monday?’ And she said, ‘What do you mean?’ I said, ‘Monday when we can eat again — what’s the first thing you’re going to eat?’ And she goes, ‘Oh, yeah. I don’t do that!’ So, my beauty routine is to be more like Jessica Chastain. She doesn’t worry about it. She just shows up, and is who she is, so my New Year’s Resolution is to be more like Jessica Chastain.”

But the brunette beauty admits she doesn’t feel as much pressure to look perfect this year because she plans to watch most of the star-studded events on TV. She told Us Weekly: ”My beauty routine for this red carpet season is wearing sweatpants on the couch.”