Movie Discussion > Interviews > Anthony Daniels on new book I Am C-3PO: The Inside Story 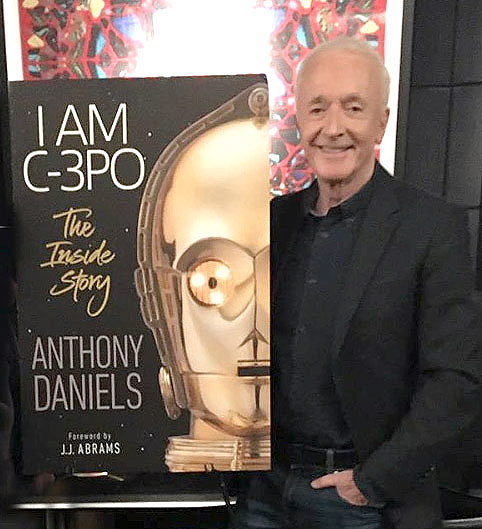 When Anthony Daniels first auditioned for Star Wars, he wasn’t sure he wanted the role, but as he says in his new book, I Am C-3PO: The Inside Story, there was something about an artist’s rendering of the character he was auditioning for that called out to him. That character, as Star Wars fans know, is C-3PO, or Threepio, as he’s referred to by the author and in the script pages that are included in the book.

A droid, he appears first in the movie we now refer to as A New Hope, although it was simply called Star Wars when it first hit theaters in 1977. Daniels has gone on to play a role in every Star Wars production since, usually as C-3PO, but since the character doesn’t appear in Solo: A Star Wars Story, the director called upon him to play another character.

We were invited to chat with Mr. Daniels on Monday in Toronto about his book — which is a gift to his fans. It has tons of information not only about how he got the part, but how each film was shot, as well as numerous photos from the sets of the films, and a section devoted to Star Wars merchandise. It’s a fun read and is now available for purchase. ~Alexandra Heilbron

What inspired you to write this book?
No inspiration at all. I was invited to write it: “Would you like to write a book?” And I went, “Hm. Okay.” This started off at 40,000 words and I ended up doing about 95,000. Because suddenly you think, “Oh, I could tell people about this. Ah, I remember that!” I had to think, how do you lay out a book. I’d never done a book before. And I realized that there are nine films, or 11 films really for me, and they form a kind clothes line if you will, onto which I pegged other things. So you’ve got all of these movies and then there are all the ancillary stories, articles that I talk about, that will interest some people, I hope. And then, as time went on, I realized we were approaching Episode IX, and circumspectly and with great loyal reverence to this new movie I was able to include that in roundabout terms. So suddenly I had a complete box set of my film life. It seemed like the right moment.

I’m impressed you didn’t have a ghost writer.
That was never a thing to be considered. These are my thoughts and I actually don’t understand how a ghost writer works because either they’re my thoughts or they’re not. And I’m going to write them down if they’re my thoughts. So I did it. But it was kind of lonely. The whole thing’s about loneliness, really. Isolation. I was writing it sitting in our house in France last Christmas with no central heating with only my fingertips showing under the blankets and a hat and scarf and hot water bottle (laughs). And then on more comfortable airplanes and on the set of the last film, I had plenty of time to sit at my computer. But it’s taken over a year. It’s a ton of work, writing a book. I’ve done it. I can’t take any of it back. Maybe people will be surprised, moved, upset, angry, I don’t know. I’ve said it. And I mean it. People interpret words any which way. I interpreted Threepio completely differently from the way George intended him to be interpreted. For that, I’m not sorry. Threepio was waiting somewhere to arrive. 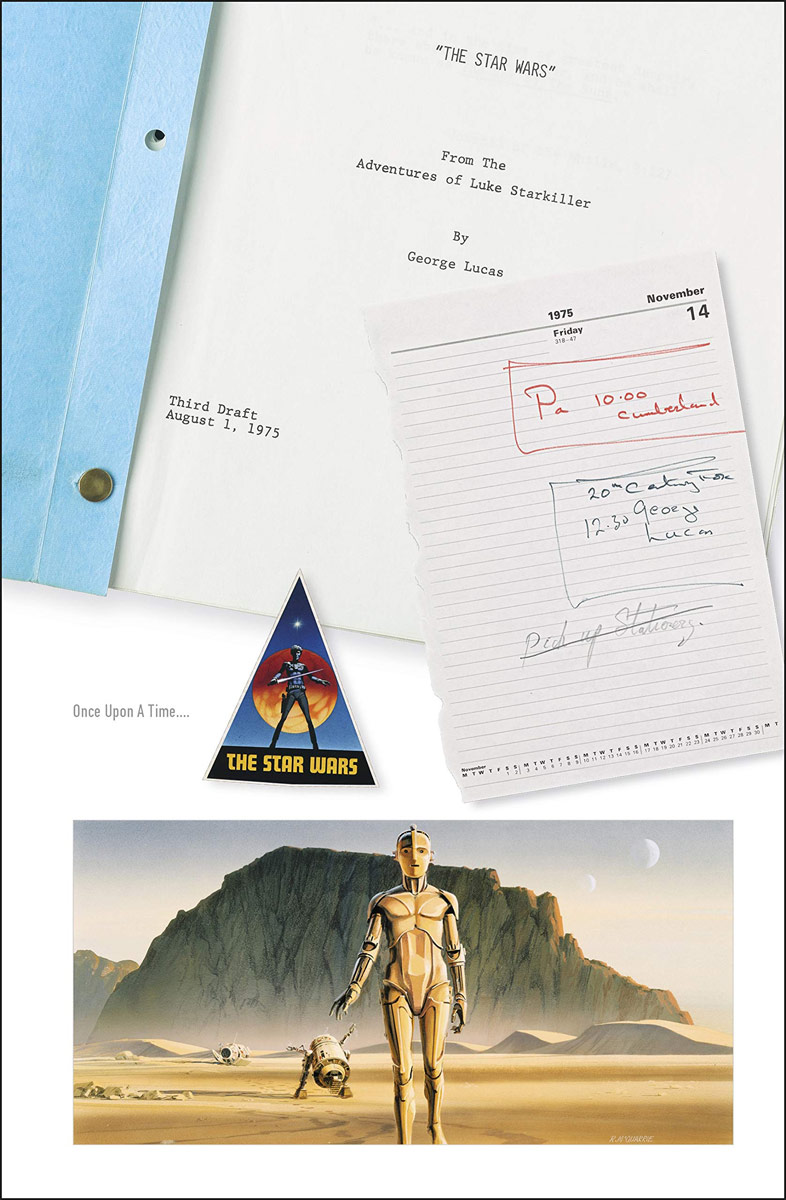 I was fascinated by the inclusion of the Star Wars merchandise in the book and you included photographs of everything you mentioned in the book, which made me wonder, how much space in your home is devoted to it?
Both my wife Christine and I have reached a stage in life where we don’t want things. We don’t want clutter. The more you can give away, I mean, if you come and visit, please bring a bottle of wine, maybe a piece of cheese, something like that. Don’t bring me a thing. We’ve got enough things. So, really I talk about the one object that is on display on the sideboard, which is the LEGO C-3PO. But the artifacts I [include in the photos in the book] were actually mostly in boxes in the attic. And it was difficult but finding the original scripts — because I’ve thrown tons of stuff away — finding the original seat back [with his name on it from the set of the first film] and then finding this page from my diary (pictured at right). They were meant to be snapshots, so I organized them to turn them into Polaroids, just because you’re apologizing because it’s a silly little picture but it gets the message across, doesn’t it?

I love the pictures, they perfectly describe what you’re talking about in each section.
Did you? You’re the first person to mention them, so I’m pleased.

You say in the book you felt underappreciated by George Lucas — did he praise Mark, Harrison and Carrie or was that just typical of the kind of person he is, that he just doesn’t show appreciation much?
I think it was obvious from the way they were treated, publicly displayed and feted. I think he found it easier to relate to them. American. Visual. It was long ago. I survived (laughs). And maybe in a way, it is about survival and tenacity, this book, you know? Just as George had tenacity in making his film in the first place, because nobody was interested. He sort of walked it around until Fox backed him. Good for them and good for George, you know? So there were two stories. His, and the story of me potentially trying to turn down the opportunity. That was a stupid thing to do. And I do tell people, “Go for everything you’re offered.” I learned.

I noticed in the book that you say yes to every opportunity. I feel like that’s the true measure of someone who’s successful. They don’t say no.
I think you’re right. I’m trying to think if I have turned things down. I’m desperate for work (laughs).
(He then whispers: “Not really.”) Often somebody will come with a project — it’s usually Star Wars — and often they now allow me to fuss around with the script because I don’t think anybody speaks like Threepio like I do. So I know when something’s out of character. And it helps keep the character real for audiences who see him somewhere else, not just in the movies — animation series, or even in a game. So I like to think I am his spokesperson on this planet. 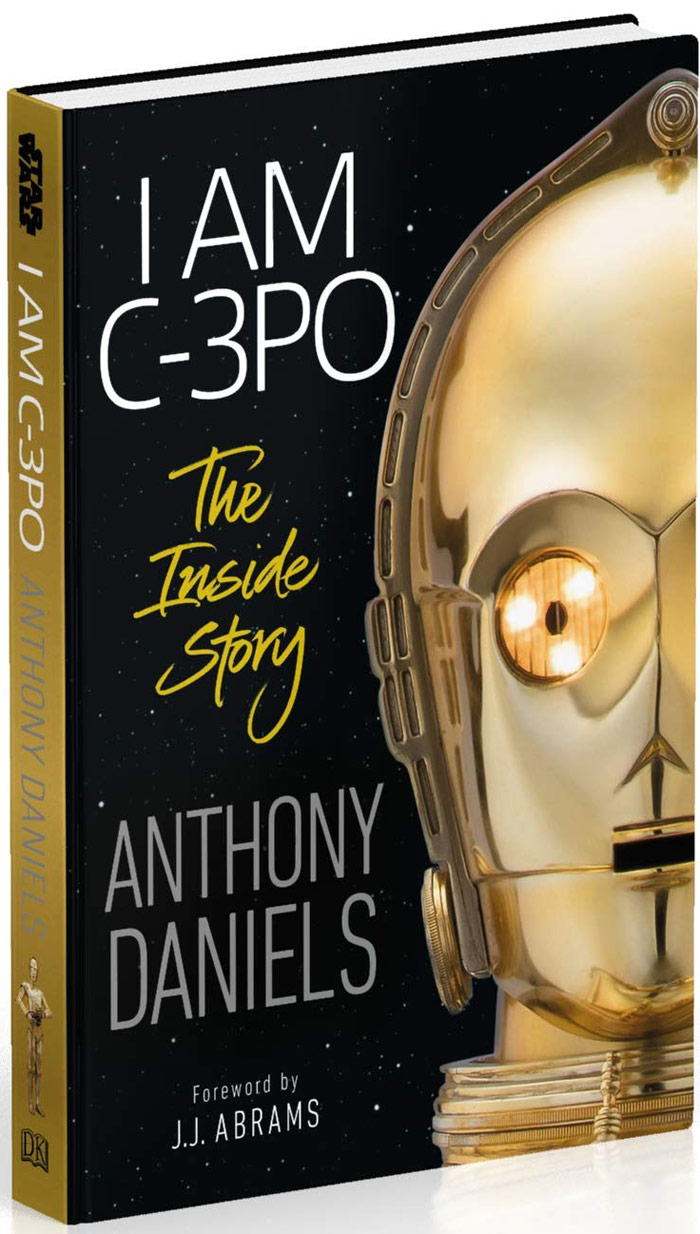 I loved your anecdotes about Mark Hamill in the book.
He’s a lovely person. As are the others. He’s a very sweet person, you know, and we had a lot of dialogue in those early days in the desert [in the first movie] where it was extreme conditions. He was kind of a kid back then. I was really touched when he sent the email [included in the book]. A few days later, I asked, “Would it be okay if I put it in the book?” Because I was genuinely touched by it. It’s just the way he wrote it.

Which of the movies was your favorite to watch, and which was your favorite to make?
To watch is Episode IV, the first one. Because it had a kind of innocence about it, it had a story that seemed complete. It was self standing. It was simple. I understood. From then on, it got a bit complicated, with the Force, and all these Jedis and stuff. The third one, with the Ewoks, what a wonderful piece of reverse thought to have Threepio as a god, that was great fun actually. The production itself was slightly flawed but maybe I do remember that with fondness.

I heard you’ve been to the new Star Wars land, Galaxy’s Edge at Disneyland — did you enjoy it?
Yeah, I flew the Falcon. A lot more interesting than the real one, I have to tell you. The real one doesn’t do anything (laughs). I did crash into things. It’s in real time and it’s pretty impressive. And there’s more to come. So with Disney having taken over the whole franchise, with their imagination and their skills as storytellers, it is going to go on. It’s not the Skywalker Saga, but that’s always going to be there. And so my journey isn’t over yet. The last words I write are, they’re two words. It’s not The End. It’s An End. Because it’s not over yet.

I Am C-3PO: The Inside Story, published by DK Books, is now available online and in book stores. Click here to purchase on Amazon. Star Wars: The Rise of Skywalker, releases in theaters December 19, 2019. Click here to watch our 2015 interview with Anthony Daniels for Star Wars: The Force Awakens. 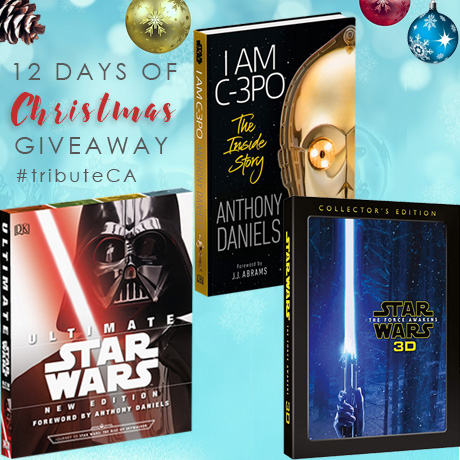