Celebrity Gossip > Bradley Cooper in talks to play The Crow

Bradley Cooper in talks to play The Crow 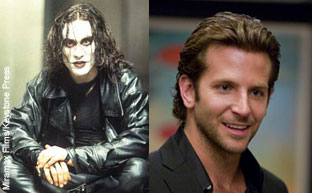 The Hangover star Bradley Cooper, whose star power was proven in his recent film Limitless, is in talks for a remake of the 1994 horror film The Crow. The film is a comic book adaptation about a rock guitarist who returns from the dead a year after he and his fiancée are murdered, to take revenge on the killers, tracking them down one by one. The original film is most famous for the tragic death of Brandon Lee, 28, (above left) the son of the late Bruce Lee. Brandon was on the verge of stardom when he landed the role.

With just eight days left to shoot, Brandon was killed during a scene in which his character returns home to find his fiancée being attacked by thugs. It was later determined that a bullet tip had jammed into the barrel after crew members manufactured their own dummy bullets from live ammunition rather than buying them. On the night of the shoot, the live round was fired out of the gun by an actor playing a villain, who hadn’t been properly briefed by the weapons specialists. Brandon fell to the ground as the scene continued around him. It was only after the director yelled “Cut” that it was discovered he’d actually been shot in the abdomen. He later died in hospital and the movie was completed using a stunt double. Are you looking forward to a remake of The Crow? Do you think Cooper is a good choice for the lead or is there another actor who would be a better choice? Should the movie even be made considering the tragedy that occurred during the filming of the first one?