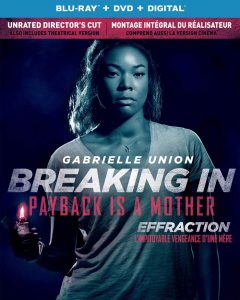 starts off with an obviously wealthy man in his luxurious apartment, picking out one of a number of high-end watches from a drawer. He’s in running gear, and before heading out the door, he grabs a music player and ear buds.

As he’s crossing a street, a van sends him flying. The driver stops, but takes his sweet time. When he does approach the man on the ground, rather than help, he kicks him, delivering the final blow and ensuring his death.

Cut to the man’s daughter, Shaun Russell (Gabrielle Union), who never really got along with her father. She’s driving to his country estate with her daughter Jasmine and son Glover to clean up the house and make it ready for the real estate agent.

Although Shaun grew up there, she left home at a young age and never returned, so the kids have never seen the house before and marvel at the state-of-the-art security system, complete with frosted glass panels that slide down inside the windows to double the safety and to keep prying eyes out.

Glover quickly figures out how everything works, including the security cameras. When Shaun goes outside to check the grounds, she’s attacked. Although she fights the man off, when she rushes back towards the house, she can see her children inside, being held there by a man with a gun as the frosted glass panel descends, cutting off her view.

From there, we’re offered a cat-and-mouse game. Shaun has already taken care of the man outside (she’s obviously had some martial arts training in her life, which seems plausible, given the amount of security her father has installed). That leaves three men inside, all with differing morals/abilities.

The leader, Eddie (Billy Burke), doesn’t seem to care what goes down, as long as he gets what they came for, which is a safe full of money. He doesn’t want to kill anyone, but if that’s what it takes, so be it. Duncan (Richard Cabral) is the scariest of the criminals. He will kill anyone who stands in the way, and has to constantly be calmed down by Eddie. The youngest of the three, Sam (Levi Meaden), is the most squeamish. He doesn’t want anyone killed and is alarmed by Duncan’s acts of violence.

Gabrielle plays the role of Shaun with the right amount of fear, desperation and vehemence. She’s not a one-woman killing machine. She’s a mother with one goal — to get her kids to safety. If the guys had come in wearing balaclavas and asked for the money, she probably would have handed it over with no qualms, as long as they didn’t harm anyone. But after the robbers put her kids in danger, she had no other option.

One thing I wondered about this movie was what problem did Shaun have with her father? He was obviously into something illegal, but we’re never told exactly what. Also, why was someone with so many enemies running alone with no bodyguards? He could obviously afford them. They may or may not have been able to stop the car from hitting him, but they would likely have been able to take down the guy in the car and save the father’s life.

However, if you don’t worry too much about the nuances, this is a pretty decent thriller. There are so many twists and turns that you never know what’s going to happen next. It’s also fascinating to watch a woman take on four bad guys. Other than some martial arts training at some point in her life (which is never discussed in the film), she’s just a mom who’s wily and desperate and who is never going to give up as long as her kids are in harm’s way.

The bonus features include an alternative opening, deleted/extended scenes and several featurettes (One Bad Mother…; A Lesson in Kicking Ass; A Hero Evolved; A Filmmaker’s Eye: James McTeigue; and a feature commentary with director James McTeigue and scriptwriter Ryan Engle). The behind-the-scenes featurettes are fascinating, because most of the film takes place at night, but as we can see, it was filmed during the day and made to seem as if it’s dark. Also, we get to see the “roof” on which some of the action takes place. It appears to be inside a studio and is only a couple of feet off the ground.

If you would like a copy of Breaking In on Blu-ray/DVD/Digital, click here to buy it now at Amazon.