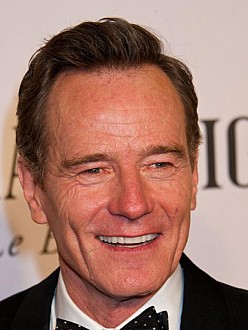 Bryan Cranston has won a Tony Award for his Broadway debut. The Breaking Bad star picked up Best Lead Actor in a Play for his role as former President Lyndon B. Johnson in Robert Schenkkan’s All The Way,  beating actors such as Chris O’Dowd in Of Mice and Men to the title.
The award was the multiple Emmy award winner’s first ever theater prize, while All The Way was crowned Best Play.
Audra McDonald made history by winning her sixth Tony for her performance as Billie Holiday in Lady Day at Emerson’s Bar & Grill, becoming the only woman to win a Tony in all four acting categories.
She said in her emotional acceptance speech: ”I want to thank all the shoulders of the strong and brave and courageous women that I am standing on. And most of all Billie Holiday. You deserve so much more than you were given when you were on this earth.”

British actress Sophie Okonedo was given the Featured Actress in a Play prize for her Broadway debut as Denzel Washington’s wife in A Raisin in the Sun. The play also won best revival.
The ceremony was hosted by Hugh Jackman at Radio City Music and boasted performances by Tony nominated singer Idina Menzel, Gladys Knight and the cast of Cabaret.
The Les Misérables actor, who was hosting for the first time in nine years, joined the cast of the musical After Midnight for a rendition of ‘It Don’t Mean a Thing (If it Ain’t Got that Swing).’
Another highlight from the ceremony was Neil Patrick Harris – who scooped the Best Actor in a Musical award – performing a song from Hedwig and the Angry Inch dressed in a miniskirt and blond wig.
He got into character by giving an audience member a lap dance and even confiscated Samuel L. Jackson’s glasses and licked them.