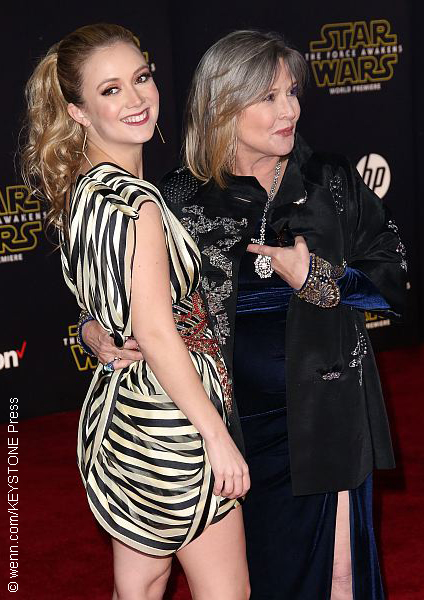 ‘s daughter Billie Lourd is moving from one Ryan Murphy project to another.

The Hollywood Reporter confirms that Scream Queens alumna Billie, 24, has been named to the cast of American Horror Story season seven. She will join franchise mainstay Sarah Paulson in the upcoming season, which many are predicting will premiere in October as per the series’ standard.

Along with Emmy winner Sarah, Billie will be joined by recently announced cast member Billy Eichner (who will also make his AHS debut) and series regular Evan Peters.

Although juicy details haven’t been divulged, we do know the next season will revolve around an election. It’s set to pick up one day after the results have been revealed.

Currently, Donald Trump and Hillary Clinton are not slated to be portrayed — although we’d love to see Ryan Murphy’s depiction of Trump.

Ryan discussed the election-themed season with The Hollywood Reporter and shed light on what he seeks to explore: “All of the stuff that I’m developing now is going to be about illuminating and highlighting people who don’t have a voice in our culture — people who are ignored by the current administration and who are afraid and feel terrorized that their lives are going to be taken away.”

Billie, who’s set to reprise her Star Wars: The Force Awakens role in December 2017’s Star Wars: The Last Jedi, will also appear in the second season of Scream Queens. However, that is expected to be the show’s farewell run.

What do you think of Billie’s casting in AHS? What character would you like to see her play? ~Matthew Pariselli