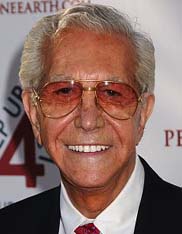 Mr. Blackwell, whose annual worst-dressed list ridiculed celebrity fashion faux pas, died Sunday at the age of 86 due to complications from an intestinal infection. Blackwell, whose real name was Richard Sylvan Selzer, started as an actor, then switched to dress designing. When he released his first list in 1960 criticising fashions, he instantly gained the celebrity status he’d long desired. He skewered celebrities for daring to be dowdy or outrageous, calling Madonna “The Bare-Bottomed Bore of Babylon,” Renée Zellweger “A painted pumpkin on a pogo stick,” and Sharon Stone “An over-the-hill Cruella de Ville.” Of Cameron Diaz, he said: “Looks like she was dressed by a colorblind circus clown.” Blackwell claimed to be aware of how cruel his statements could be, calling himself “the worst bitch in the world,” but reasoned that he genuinely admired many of the people on the list for their talent — he just bemoaned their lack of fashion sense.