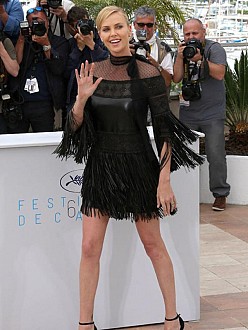 The South African beauty ”abruptly” ended her 18-month relationship with the Oscar winner shortly after they returned from the Cannes Film Festival in the South of France last month and has completely cut off contact with him.

A source said: ”As far as I know, Charlize won’t talk to him. She just cut if off. They’re absolutely done.”

While the Milk actor, 54, was regularly spotted playing with the Mad Max: Fury Road star’s three-year-old son Jackson, their romance was far from perfect, according to friends.

The insider told Us Weekly: ”[It] was very volatile. They both have intense personalities and are control freaks. He’s a tough person, and she’s no picnic either.”

The former couple were friends for two decades before they decided to start dating in late 2013, but they are unlikely to go back to being pals.

Another source said: ”It ended abruptly. If you get on her bad side, she finds it hard to forgive.”

Charlize, 39, has also returned the engagement ring Sean is said to have given her during a romantic trip to Paris last November.

The source said: ”He already got the ring back. It wasn’t amicable.”