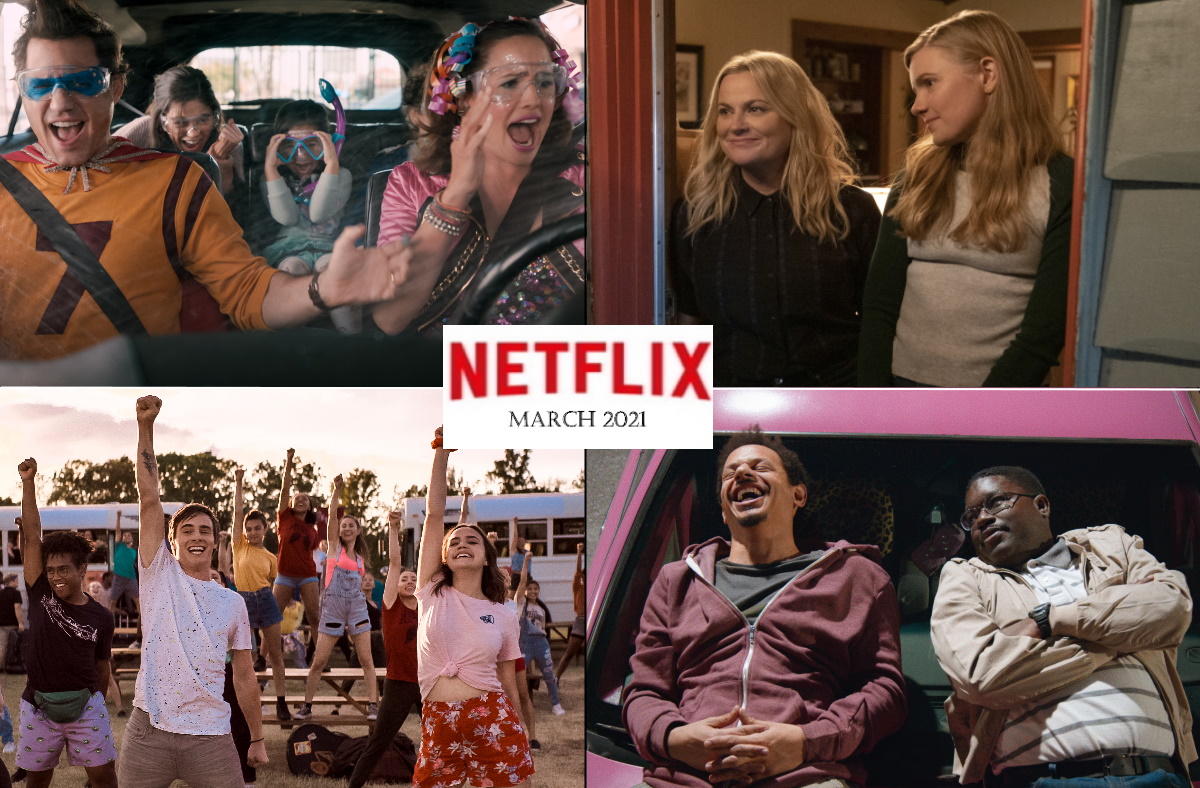 An exciting new selection of March titles will be coming to the streamer! From family friendly finds to chilling documentaries, there’s something for everyone. Amy Poehler directs and stars in Moxie, an adaptation of the best-selling novel of the same name; Jennifer Garner brings a family friendly film with Yes Day; and Eric André, Lil Rel Howery and Tiffany Haddish bring their best pranks in the film Bad Trip. Check out our Netflix guide for March.

Inspired by her mom’s (Amy Poehler) rebellious past, shy 16-year-old Vivian anonymously publishes an underground zine called Moxie to expose bias and wrongdoings at her high school in the film, Moxie (Mar. 3). This comedy is entertaining for all ages.

In the film Yes Day (Mar. 12), Allison (Jennifer Garner) and Carlos (Edgar Ramírez) decide to give their three kids a “Yes Day,” during which the kids have 24 hours to make the rules.

A rather cute family friendly series is Waffles + Mochi (Mar. 16), which follows curious puppet pals Waffles and Mochi as they travel the world exploring the wonders of food and culture while learning how to cook with fresh ingredients. The series also features Michelle Obama, famous chefs, fun songs and celebrity guests.

A true-crime series to tune into on March 17 is Under Suspicion: Uncovering the Wesphael Case, which follows the high-profile court case of Belgian politician Bernard Wesphael, who was accused of murdering his wife in 2013.

In the film Country Comfort (Mar. 19), when an aspiring young country singer (Katharine McPhee) is fired from her band, she takes a job as a nanny for a musically talented family.

Netflix’s first-ever Christian musical A Week Away premieres on March 26. It follows troubled teen Will (Kevin Quinn), who is forced to either go to juvenile detention or attend a Christian summer camp after a run-in with the law. He attends Christian summer camp, where he discovers love with a camp regular (Bailee Madison) and a sense of belonging in the last place he expected.

A late-night comedy debuting March 26 is Bad Trip. It follows two pals who embark on a road trip full of funny pranks, as they pull real people into the mayhem. Starring Eric André, Lil Rel Howery and Tiffany Haddish.

One sure pick is the Oscar-nominated film Vice, starring Christian Bale and Sam Rockwell. After George W. Bush (Rockwell) is elected President of the United States, Dick Cheney (Bale) becomes Vice President and quickly begins pulling all the right strings to become the most powerful VP in American history. Bale was nominated for an Oscar for his work in the film.

Fan-favorite Bill & Ted Face The Music (Mar. 28) takes us on a new adventure with Bill (Alex Winter) and Ted (Keanu Reeves) as they travel through time to put together the most extraordinary band from people throughout history.

Fans of the musical comedies Pitch Perfect and Pitch Perfect 2 will get to watch both films back to back as the acapella band takes over the streamer on March 3.

It might not be the month of romance anymore, but we don’t need a reason to watch the classic film, Serendipity (Mar. 1), starring Kate Beckinsale and John Cusack.

We also recommend the film Diana (Mar. 1), detailing the final years of Princess Diana’s (Naomi Watts) life before her death in Paris in 1997. The movie centers on her relationship with British-Pakistani heart and lung surgeon, Dr. Hasnat Khan (Naveen Andrews). Their 18-month relationship ended mere weeks before the accident that caused her death.

Click here for a photo gallery of all the Originals hitting Netflix in March.

Find out below everything that’s coming to Netflix this March and also what’s leaving the streamer. ~Marriska Fernandes

March 14
The Curse of La Llorona

March 7
A Star Is Born