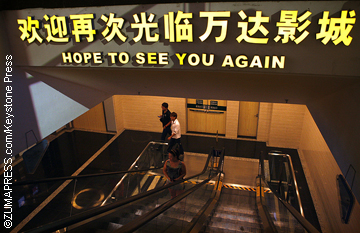 If you attend a theater in a major Chinese city, you may find yourself looking at a “bullet screen,” which shows projected text messages the audience sends while watching the movie. A manager at one of the theaters trying out the new system, surnamed Zhang, said at his theater the “bullet information” was sent by SMS at 0.1 yuan (approximately 10 cents per message). He says,“People like it right now, as it’s a new thing. In the long term, it might affect people’s concentration. We are trying to continue with some bullet screen activities and play some films that young people like. Time will tell.”

Although so far the new system has received mixed reviews from audience members, The Legend of Qin director Shen Leping is all for audience participation. “We are exploring how the response from the audience can affect the movie itself… We are, in fact, putting the director and viewer on equal terms, and I think many of the opinions of the viewers are very helpful for filmmakers.” Currently, filmmakers can opt out of the “bullet screen” for their films.

As many young people in China already use their mobile devices to watch and comment on media, the film exhibitors want to tap into this trend but it’s hardly the first way fans were given an interactive experience in theaters. In Japan, some fans can already spend the whole movie trading comments via SMS. The Rocky Horror Picture Show is a great example of active audience participation. The pre-show in some North American theaters offers contests for answering trivia quizzes via mobile devices. 3D was a controversial move for some when it first appeared in theaters, so perhaps the text-on-screen trend will catch on the same way. Would you be interested in this feature on movie screens? ~Andrea Hodgins[poll id=”663″]