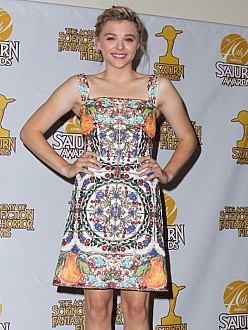 Chloe Grace Moretz says she and Brooklyn Beckham ''just hang out with each other." The 17-year-old Kick-Ass star has been romantically linked to Victoria and David's eldest son, after Chloe was seen skateboarding with Brooklyn earlier this year, but the actress is refusing to put a label on their relationship. She told The Sunday Times magazine: ''I don't even know what dating is at this point. It's all so stupid ... why can't you just hang out with each other. Go to dinner if you want to? Why can't you go skateboarding if you want to go skateboarding with a guy?'' Recently, a source has revealed that Brooklyn is ''smitten'' with the movie star. The source said: ''Brooklyn is very sweet and shy, a really nice boy. Chloe is more sophisticated.'' Chloe has also opened up about her friendship with the British star, admitting that when it comes to their hobbies, he's much more likely to take risks. When asked who was a better skateboarder, she replied: ''I don't know. I mean, he has a pretty small skateboard, and I like more of a long board. I think he's a risk taker, like a typical guy, weaving in and out of people. I'm a safety boarder - I don't want to break any bones.''