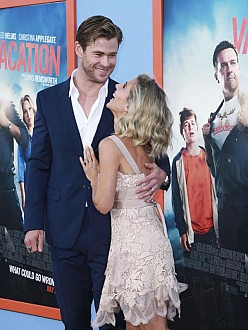 The Avengers: Age of Utron star’s little girl India Rose, two, used to like being swung around when he bulked up to portray the superhero, but now she doesn’t like his outfit or accompanying long blond wig.

Chris – who also has twins Sasha and Tristan, 16 months, with wife Elsa Pataky – said: ”My daughter, with the Thor costume especially, used to be like, ‘Oh yeah, it’s a big different’ and she was happy that I’d pick her up and swing her around. Now, she’s like, ‘Off, off’ because it’s all bulky and metal, and she pulls at the wig, she doesn’t like the look.”

The 31-year-old actor admits he doesn’t speak his wife’s native Spanish as well as he’d like but knows he needs to up his game before his kids’ linguistic skills outdo his own.

He said: ”Our daughter is already speaking Spanish and our twins are going to be fluent in bother English and Spanish. Maybe I’m going to have to raise my Spanish level.”

However, the Snow White & the Huntsman star does have one very important phrase mastered.

Speaking to Sorted magazine, he laughed: ”I’ve learnt a very important Spanish phrase which helps calm things down – Si, mi amor (yes, my love). Saying ‘Si, mi amor’ is enough to cool things down between us when we’re having one of those typical husband-wife moments.”