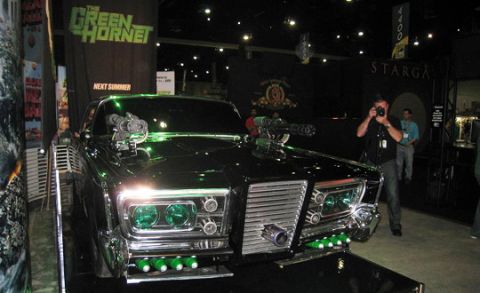 On the first night of Comic-Con, funnyman Seth Rogen revealed the Black Beauty, the car he’ll be driving in the upcoming The Green Hornet (2010). Rogen was joined by director Michel Gondry, writer Evan Goldberg and producer Neal Moritz as he lifted the black veil that was covering the vehicle.

Seth said he was glad he could make a surprise appearance at Comic-Con even though it was a surprise “only to people who don’t know how to use the Internet.” Seth, who lost a ton of weight for the role, revealed the black car which has a very retro look and feel and doesn’t appear to be highly stylized according to Comic-Con insiders. 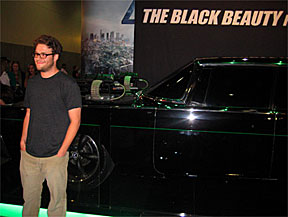 When asked if the upcoming Green Hornet movie will stick to the original Seth told Comingsoon.net: “He’s actually the Lone Ranger’s grandnephew. The Lone Ranger is owned by Jerry Bruckheimer so that probably limits the amount of involvement we can actually have in that movie. We were inspired by the original. We kind of took what we thought was good and left what we didn’t. Honestly, we didn’t feel any real obligation living up to the original because the radio plays totally different than the TV show, which is different than the comic book. There is no real set way.”