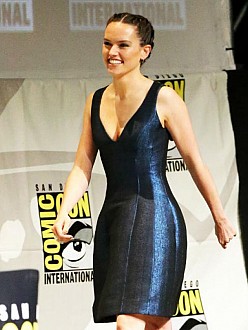 The 23-year-old actress was cast as the lead role Rey in the upcoming blockbuster movie but admitted she considered bowing out of the film after she almost suffered a panic attack when the the director criticized her work.

She explained: ”I was petrified. I thought I was gonna have a panic attack on the first day. [I remember thinking], ‘I can’t do it.’ Because JJ, he probably doesn’t remember telling me that my performance was wooden. This was the first day! And I honestly wanted to die. I thought I was gonna cry, I couldn’t breathe. And there were so many crew there, because obviously all the creatures [had stand-ins], and there were loads of extra crew making sure everyone was safe because it was so hot.”

But the brunette beauty – who plays ”a scavenger in a ship graveyard” who fights off evil forces – expected Abrams to be tough on her because she knew what he wanted from her.

She told magazine: ”To find someone to shoulder a ‘Star Wars’ movie, you need to find people who can make you laugh and show emotion and do action and also handle the pressure of starring in ‘Star Wars.’ It’s like finding someone who can compete in every event in the Olympics.”