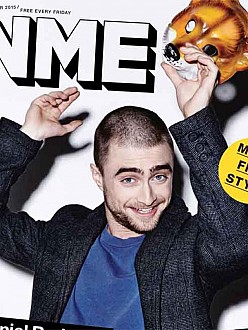 Daniel Radcliffe is jealous of Eddie Redmayne‘s costume in Fantastic Beasts and Where to Find Them.

Eddie is playing wizard Newt Scamander in the Harry Potter spin-off film and Daniel can’t believe he gets to wear such an impressive magic outfit when had to don a ”zip top” as boy wizard Harry.

In an interview in the new issue of NME magazine, he said: ”Oh f**k you, Eddie, in your brilliant costume … I got jeans and a zip top for 10 years and you’ve got a great coat already?”

Daniel portrayed J.K. Rowling’s literary character in all eight movies from 2001 to 2011 and he admits it’s going to be odd for him to watch someone else take on the role in the upcoming London West End stage show Harry Potter and the Cursed Child.

When asked if he’ll go and watch the production, he added: ”Now that I know (Harry’s in it) I actually really want to see it. It would be a mental thing to try and see it with lots of very excited ‘Harry Potter’ fans. But I kind of would like to know what happens now.”