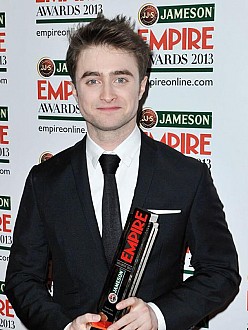 Daniel Radcliffe and Erin Darke are ''very happy'' together. The couple - who have been dating for around two years - made their first official appearance together at the Tony awards earlier this month and were seen looking affectionate at an afterparty at Skylark club in New York following the ceremony. A source told Us Weekly: ''They were inseparable. They have great chemistry.'' Daniel admitted last October he was dating, though he didn't reveal it was his Kill Your Darlings co-star. He said: ''Yes, I am dating someone. And my type is...the type I keep private. My type is intelligent.'' The 24-year-old hunk split from his previous girlfriend Rosie Coker in October 2012 after two years of dating and reportedly tried to woo Erin not long afterwards.

However, it was believed Erin was left ''devastated'' when he apparently ended their brief relationship. A source said at the time: ''Erin thought it was a real relationship, going as far as introducing Daniel as her boyfriend. He's flown her out to London and taken her on dates and spent plenty of time with her in NYC, but Daniel just up and left New York without a second thought. Erin was devastated.'' However, the split didn't last long as the pair were spotted with each other again in London last August.