News > Daniel Radcliffe wants to be a young dad

Daniel Radcliffe wants to be a young dad 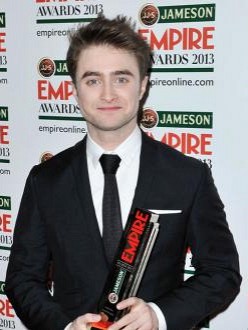 Daniel Radcliffe wants to be a young father. The 23-year-old actor - who was linked to his Kill You Darlings co-star Erin Darke after splitting from girlfriend Rosie Coker in October - is in no rush to start a family but wants kids before he turns 30. He told Time Out London: "I'd like to get started on it before my thirties. I like the idea of being a youngish parent so I've got energy to play football even though they'll be better than me by the time they're four. I'm definitely going to be one of those parents who pushes their kids into things...[although] not the film industry. I've grown up around lots of people who were having kids when I knew them, because a lot of them were a lot older than me. And I saw the wonderful change in them. I see that it gives you a sense of purpose that up till now I only really get from work. I want that [purpose]." While Daniel isn't yet ready to marry, the diminutive actor joked he will need to find a very tall wife if he wants his children to be sporty. He said: "I will have to find a very tall wife if they're going to be good at sports. You could be my size as a boxer, you'd just have to be a super featherweight or something."