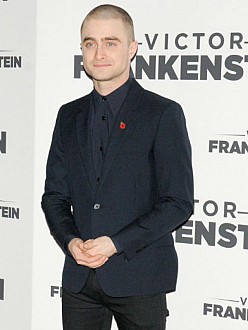 Daniel Radcliffe had a brush with lions on the set of his latest movie.

The actor stars alongside James McAvoy in Victor Frankenstein, and he had a close encounter with the terrifying animals while filming one particular scene.

Daniel – who appears in the role of Igor – explained he was making his way around a circus during the shoot and ”as soon as I got into my crouched hunchback position [two lions on set] started tracking me.”

He told the New York Post: ”They went down to the ground. I talked to the [trainers] and they said, ‘Yeah, they think you’re like a hurt animal, they’re honing in on you.’ I was like, ‘Man, lions are b**tards.'”

Meanwhile, Daniel recently confessed that people who meet him for the first time are surprised to learn he’s not ”an absolute a**hole.”

The actor, who landed the lead role in the Harry Potter franchise when he was 11, said he’s more down-to-earth than the majority of child stars.

He said: ”When I did my first non-Potter film, ‘December Boys’ [in 2007], I became good friends with one of the make-up and hair teams. After a few weeks, I said, ‘So, honestly, what did you expect when you were going to get me?’ And they said, ‘We thought you were going to be a d**k.’ Because that’s the notion people have in their heads of child stars. People expect me to be an absolute a**hole. And when I’m not, that always plays in my favour.”