ALL THEATRES ARE CLOSED UNTIL FURTHER NOTICE, DUE TO COVID-19.
Features > Dennis Quaid astounds as The Intruder – Blu-ray review 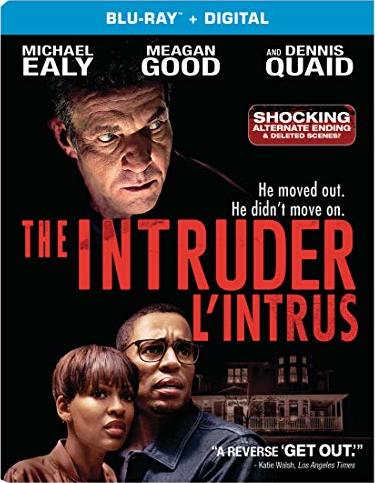 Lost in all the hype surrounding the release of Avengers: Endgame was this little home invasion thriller starring Michael Ealy, Meagan Good, and Dennis Quaid.

The Intruder follows the young couple of Scott (Ealy) and Annie Russell (Good), who are looking to purchase their first home together. After a long search they visit the Foxglove estate, owned by widower Charlie Peck (Quaid). The Russells, smitten, decide to purchase the house, even as Charlie looks reluctant about the transaction. The home had been in his family for three generations, but following the passing of his wife and then his daughter moving out, there was no point in him staying.

Acts like mowing the lawn, questioning the new decor, and roaming the property as if he still owned it begin to unsettle Scott, who grows more suspicious of Charlie. His concerns are rebuked by Annie, who is a little more sympathetic as she tries to understand where Charlie is coming from, and welcomes Charlie’s company, as Scott is often in the city for work. However, as this continues, Charlie becomes more emboldened, with his behavior putting the young couple at risk as Scott’s suspicions escalate.

Though the premise of the film is somewhat unique, The Intruder ultimately boils down to being a home invasion film. It’s not as overt as other home invasion films — it’s done in a more subtle and subdued way, but it is a home invasion film nonetheless. Dennis Quaid as the film’s antagonist is surprisingly effective as he takes on the role with an unhinged objective, making him thoroughly unsettling in how his character will snap out of a trance back into a seemingly normal person. It’s the kind of performance that you wouldn’t expect from Quaid, but one that he sells with ease.

The Russells on the other hand are a bit problematic. Their problems fall into typical melodrama that wind up making the film longer than it needs to be. Michael Ealy does his best with what’s he’s given, but his character is just too passive. Annie, on the other hand, is written to be a little too naïve. It’s not a stretch to have a sympathetic character be a little more welcoming to some odd behavior, but if it takes practically the whole movie for her to change her opinion about Charlie, it does weaken her character.

The film’s biggest problem though, is the runtime. The Intruder feels a little prolonged, with 15-20 minutes needing to be cut. All the teasing and jump scares featuring Quaid’s character remove any mystery or suspense from the film — audiences are acutely aware of Charlie’s looming threat. As a result, the buildup to the film’s climax ends up feeling drawn out when it’s the big confrontation you’re meant to expect. Had the film been a lot tighter with its editing and kept the tension more consistent, The Intruder would’ve been far more successful at achieving what it sets out to do.

Instead what audiences get is still a serviceable thriller with a solid performance from Dennis Quaid being the biggest highlight. In a role that is typically against type for him it’s surprisingly engaging to see how Charlie navigates the situation of having sold his house, but also trying to maintain it. ~Paolo Maquiraya

Making a Modern Thriller: Behind-the-scenes of Foxglove – Cast and crew discuss the film from the casting of its three leads, the script and its story, as well as director Deon Taylor and how all the elements of the movie came together during the production.

Cast & Filmmaker Commentary – Commentary track with cast and crew giving their insights into the film.

Deleted & Alternate Scenes (including the Alternate Ending) – Extended, deleted, and/or alternate scenes from the film.