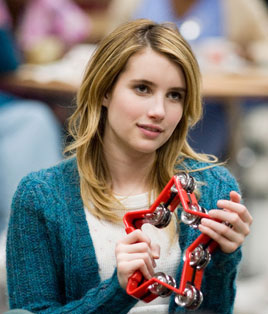 Emma Roberts, 20, the niece of Julia Roberts and daughter of actor Eric Roberts, denies that having famous relatives had anything to do with her acting success. Emma’s feature film debut was a small role at age nine in Blow, starring Johnny Depp, followed by a co-starring role opposite her aunt in the family film Grand Champion. At 12, she landed the starring role in the Nickelodeon series Unfabulous and she’s worked steadily ever since. Emma told Popeater that she’s been accused of nepotism because of her famous family: “A lot of people think that and they talk about nepotism which I think is so ridiculous considering it’s obviously not true, because I’ve auditioned for so many things and never gotten the part. Also it’s like, you know, maybe someone can get you one part but they can’t really get you ten parts.” She also said bloggers who say her success is due to nepotism are cowards: “I think it’s so funny people will blog stuff but they won’t say it to your face. I would actually have more respect for them if they said it to my face, then I would probably not say anything back,” adding, “For me I can’t let it bother me because for me anyone hiding behind a computer is kind of irrelevant.” Emma’s new movie, The Art of Getting By, opens in select cities today.