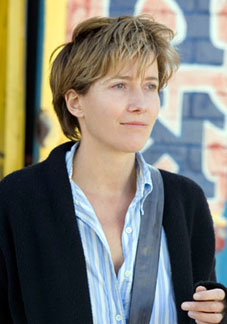 Emma Thompson, whose new film Nanny McPhee Returns opens next week, Thompson is writing the screenplay for a remake of My Fair Lady. Oscar-winning actress Audrey Hepburn starred in the original as Eliza Doolittle. Thompson, who plans to give the story a feminist twist, told British newspaper The Telegraph that Hepburn, who was nominated for five Oscars in total, including for her performance in Breakfast at Tiffany’s, essentially had no talent. “I was thrilled to be asked to do it because, having a look at it, I thought that there needs to be a new version. I’m not hugely fond of the film. I find Audrey Hepburn fantastically twee,” Thompson said. “Twee is whimsy without wit. It’s mimsy-mumsy sweetness without any kind of bite. And that’s not for me. She can’t sing and she can’t really act, I’m afraid. I’m sure she was a delightful woman — and perhaps if I had known her I would have enjoyed her acting more, but I don’t and I didn’t, so that’s all there is to it, really.” She added, “It was Cecil Beaton’s designs and Rex Harrison that gave [the original film] its extraordinary quality. I don’t do Audrey Hepburn. I think that she’s a guy thing… It’s high time that the extraordinary role of Eliza was reinterpreted, because it’s a very fantastic part for a woman.”