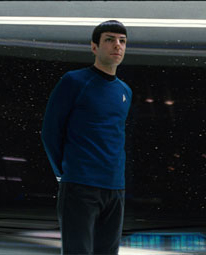 Bonnie Laufer-Krebs: First of all I just have to congratulate you on everything that’s happening for you right now. It’s great to see how Sylar, your character on Heroes, has evolved.

Zachary Quinto: It’s been such a ride you know, I’ve really been constantly surprised by the experience and where they take me creatively all the time. I remain as happy to be working on the show now as when I first joined the cast, that’s a nice feeling you know.

B: Last season we got to see a good side to Sylar but I personally like the bad Sylar more. Is it a bigger challenge playing him as the bad guy?

Z: I don’t know if it’s more of a challenge, it’s nice to have something to juxtapose that side of him.

B: Not only are you on this very popular TV show, but come May we are going to see you on the big screen in Star Trek. Was it something you went after?

Z: Yeah, I mean I pursued it, when I found out they were making it was right when my episodes of Heroes were starting to air so I was doing a lot of press and the first journalist that interviewed me from my hometown paper asked me if there was anything else I was interested in working on, so I mentioned it to him and then that interview got syndicated and then other journalists started to talk to me about it, so I ended up talking a lot about it before it even became a reality or even the beginnings of a reality.

B: How did your meeting with director J.J. Abrams come to be?

Z: The casting office had heard about me and my interest in it so they reached out for my materials and shared it with J.J. and we were able to send them my reels but and a press packet of interviews that I had given talking about the project and how much I was interested in it, so it was sort of this unintentional momentum that was created which then facilitated a connection with the casting director and then also with J.J.

B: Star Trek was one of the biggest TV shows ever, with a huge fan base. Were you a little nervous about taking this on and how did you approach the role?

Z: I wasn’t really nervous because I was so surrounded by people that I trusted implicitly and who were supporting the idea from the beginning, so it put me in a really nice position to connect with these amazing minds and the creative energy of these people, to trust that they would take me where I needed to go and go with me on the journey, Leonard Nimoy included, so it didn’t really engender in me a sense of anxiety about it so much as excitement.

B: You’re playing Spock at a younger age and it’s the origins of the characters so it’s a new approach to the franchise. After going to Comic-Con and doing interviews with some fan based websites, what is the general feeling about Star Trek?

Z: I’ve been met with tremendous enthusiasm, especially now that more and more images from the movie are being shared in trailers, and there’s a real momentum, there’s a real excitement that I’ve experienced, so that’s encouraging.

B: What about your resemblance to the early years of Leonard Nimoy?

Z: It’s pretty remarkable, I’ve been so blessed to get to know him and that comparison I think is more than just a specific thing—there’s aspects to him as a person that really resonate for me, and he’s been a real inspiration.

Z: He’s been there to answer any questions and was just very supportive of me and this entire project. Plus he is in the movie, so it just shows how supportive he is of the whole thing.

B: Do you remember the first thing he told you when you found out you were going to play Spock?

Z: Well, we actually met in an elevator at Comic-Con and he said, “You have no idea what you’re in for, kid.”

B: With the continuing expansion of the Heroes’ fan base do you think the show will go down in history as another amazing cult show?

Z: Yeah, my experience has changed accordingly in terms of the exposure that Heroes has afforded me but I guess I think Leonard’s perspective on it is lifelong and I think that the impact it will have on my life overall is what he was referring to.

B: Do you recall what it was like for you when you put the ears on for the very first time?

B: How about when you put on the Spock costume? It must have been tremendously gratifying to see yourself completely made up as this icon?

Z: Yeah definitely, there was this physical sort of transformation that took place over time. Right before we started shooting I had to shave my eyebrows and that really for me sort of drew it all together and put me in a physical space to really be available to the character.

B: Plus of course, doing the Vulcan hand signal, getting beamed… a childhood dream?

Z: It’s all part of the package, and it was really very cool. There were days on set I’d say to myself, am I really here doing this? It was quite surreal.

B: How was it working with such a fantastic cast including people like Chris Pine, Simon Pegg, and John Cho, to name a few of your co-stars?

Z: There’s really not a weak link in the bunch and everybody has such a great sense of humor, all those people you just mentioned are all enormously funny and really talented, and we had a really good time. For the most part we’re all going through something for the first time together and that’s really nice because there’s certainly actors in the movie that have been around longer, are further along on a path and have had experiences like this before, but the core of us are really being connected through what this means to us and to our lives, which is a really nice thing to be able to share.

B: Was there anyone on the set that you connected with and ended up becoming really good friends with?

Z: I knew Chris and John and Zoe (Saldana) before we did this movie. Chris and I have a lot of mutual friends and we live in the same neighborhood and run into each other a lot and hang out. He and I are obviously on the same level of what this means and really just committing to supporting each other through it. So he and I are definitely quite good friends and then everybody else also folds into that nicely and we all hang out and spend time together.

B: Are you close with your cast mates on Heroes as well?

Z: We are, I feel really gratified to be in projects that are so big in scale and so well regarded but also have a core of authenticity with the people that are involved. Everybody’s accountable to themselves and accountable to each other and that’s not always the case in this industry, so on both fronts it feels really unique and special.

B: What was it like to work with J.J. Abrams? He has one of the most imaginative minds around. Are you a fan of Lost?

Z: I have watched it sure; I’m definitely a fan of what he’s been able to do in both television and film in terms of deepening the notion of storytelling. I think J.J. is one of the most creative, imaginative people I’ve ever had the pleasure to work with and the thing that I marvel at most is he’s also a really great guy and at that level of responsibility and expectation he’s really able to plant his feet and have a genuine experience based on creative connection and personal interest that is really phenomenal and unusual I think.

B: Were you a Star Trek fan before making the film and did you end up watching episodes just to kind of get into Star Trek mode?

Z: No, not before I started the role. While shooting the movie I would play episodes in my trailer and always have it around. I got the boxed set of the series. So I watched it once we started but I wasn’t really interested in trying to recreate anything so watching the series didn’t seem like a natural departure point for my preparation. I used Leonard as a resource and I did a lot of my own reading and research and my own work with the screenplay that Bob and Alex wrote; that for me was the best way.

B: While playing Spock did you ever any similarities between him and Sylar?

Z: I think the only similarity that can really be drawn is the fact that both of these characters are really dealing with and working with deep-rooted internal conflicts and dualities within themselves but they come from very different points of view and they process those dualities very differently, so I think the similarities sort of ends there, but for different reasons they’re both working to keep control over aspects of themselves and sort of understand the power of the different energies within them. But you know, when I was doing the movie I feel like the embodiment of Sylar in that character was very far away from me.

B: What was it like to go back to the set of Heroes after filming Star Trek?

Z: It was very familiar, it was a painless transition back to something I was very comfortable in before I left and the experience of the movie only made me more comfortable going back.

B: Although you are enjoying tremendous success from Heroes, are you entirely ready for the attention you will be getting once Star Trek gets closer to opening?

Z: You really can’t get ahead of yourself, because no amount of success or exposure or opportunity is going to really matter or be ultimately fulfilling unless you can be totally present in what you’re doing right now.

B: Will we get to see more of you as Spock in other Star Trek films? Are you signed to sequels if this one takes off?

B: So you won’t mind putting those infamous ears back on?

Z: ( laughs) No, the ears are cool; shaving the eyebrows is another story, ha ha. Yeah, right now for me the experience is all about this first movie and going through the process of promoting it all over the world, sharing it with people and seeing what else is generated from this experience. Other movies will come into place when they’re meant to, when they’re able to. If that happens I’ll be excited about that as well.

B: Back to Heroes for a minute, things have really been intense for Sylar this season. Are we going to get to see some retribution on Sylar’s dad?

Z: Meeting his father, it sets him off on a different course, it makes him realize that he tends to be walking down a road to end up just like his father; I think that triggers an inner spark of motivation that returns him to some of his more traditional power hungry ways.

B: What was it like working with John Glover who plays Sylar’s sick dad?

Z: John was great, he’s a phenomenal actor and really supportive and cool, we were glad to have him for that episode but I think the idea is that Sylar is going to leave his father to his self misery and not to get satisfaction of understanding that power again.

B: Thanks so much for your time, best of luck with Heroes and Star Trek.