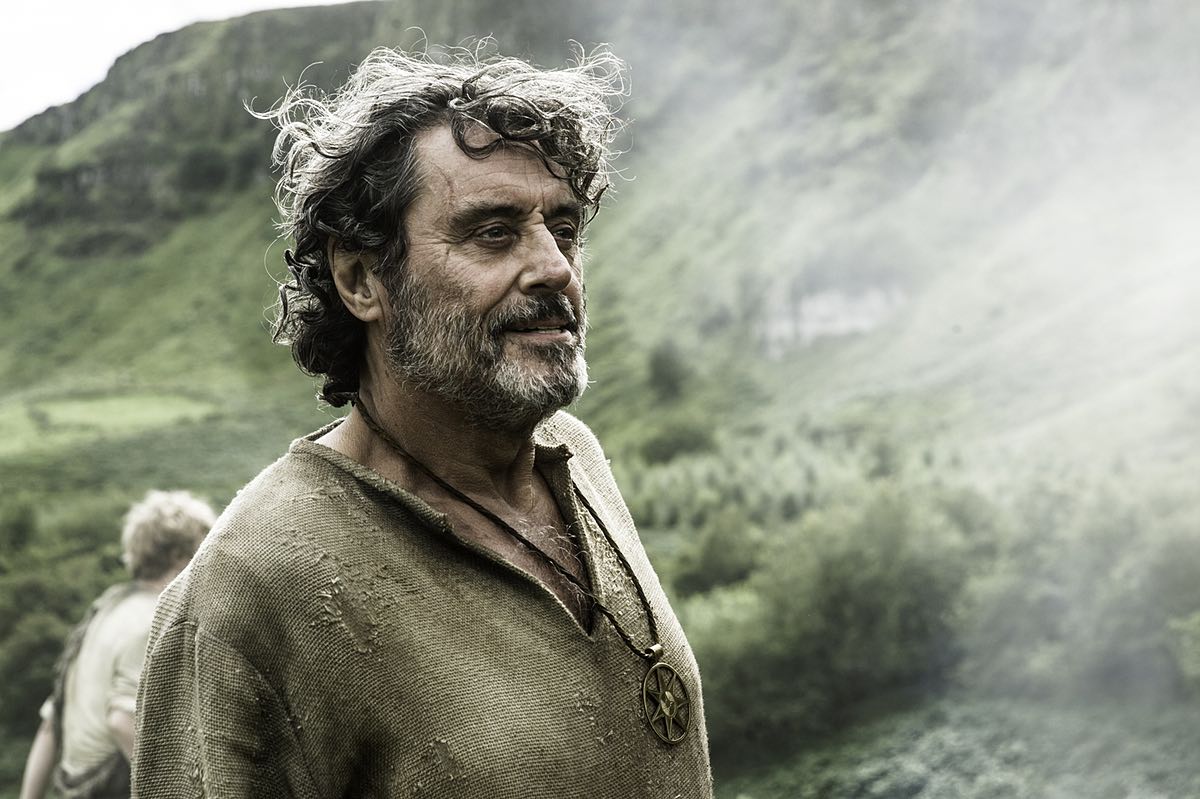 A few months ago, actor Ian McShane teased a guest appearance on this season of Game of Thrones, and said, “I bring back this much-loved character who everyone thought was dead.”

Rumors swirled — who was he talking about? Was it Jon Snow? Well, considering Jon Snow was resurrected at the top of the season by Melisandre without Ian McShane in sight, the question still remained — who is this “much-loved character” and when will he or she return?

It was Sandor Clegan — more affectionately known as the Hound (Rory McCann). The last we saw of him, he was nearly beaten to death by Brienne of Tarth at the end of season four.

This season, he appears fully healed (at least physically), and with a new purpose — to fetch and chop wood. I felt a weird sense of relief when I saw his face, as if the world (or at least the remaining Starks) became just a little bit safer. Ian McShane was right, he was and is still a very much-loved character, and I’m very glad to see him back.

And as for McShane’s character? He wasn’t wrong when he called him a “peacenik,” as he’s some sort of holy man, aptly named Ray, who’s leading the construction of a tower, or sept. And he evidently found the Hound barely alive somewhere, nursed him to health and put him to work. While the newly healed man remains stoic and isolated from the group as a sort of penance for his sins, Ray tries to help release the Hound (get it?) from his demons by telling him that he’s already paid for his sins by whatever or whoever left him near dead months before. But before Sandor can find that peace, he discovers the entire group murdered and Ray hanged from the nearly built sept. Left alone once again, this may motivate the Hound to tunnel his “hate” into something much more productive than chopping wood.

Speaking of salvation, Queen Margaery has apparently found hers. We cut to her fastidiously reading from a holy text while the High Sparrow comes to ask her about her sex life with Tommen. Awkward. She claims she no longer harbors such earthly desires, and the ever-wise Sparrow reminds her that the woman does not enter the marriage bed out of desire, but of “patience.” Basically she’s merely the vessel to a man’s desire and to providing an heir. Sage words, indeed. 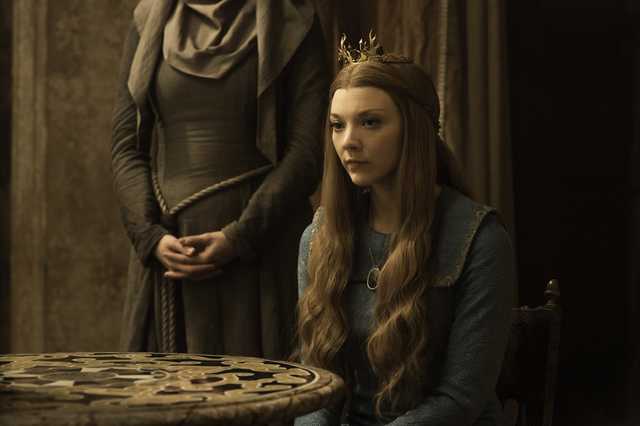 The High Sparrow also takes this opportunity to poison Queen Margaery’s (Natalie Dormer) mind against her grandmother, the Queen of Thorns, whom he basically calls a dirty sinner who must be shown the path of righteousness — or else.

Gods and holiness aside, this religious zealot seriously needs to stop sticking his nose where it doesn’t belong. But whatever manipulative crap he’s spewing this episode, luckily, I’ve a feeling Margaery isn’t truly falling for it. Whatever game she’s playing at, she’s playing it quite well.

She subsequently instructs her grandmother to leave King’s Landing at once, all while slipping her a piece of paper under the nose of the septa who follows her around. It turns out to be a simple little drawing of a rose. What could it mean? It might be a reference to the Tyrell sigil, or a reference to her brother Loras, who is commonly known as The Knight of the Flowers. I’m choosing to take it as a sign that this is Margaery’s true game — securing her brother’s freedom. And the note is telling Lady Olenna that her granddaughter isn’t quite the religious zombie she’s pretending to be. Thank the gods!

Lady Olenna is quickly marking herself as one of the most entertaining characters on the show. While Cersei (Lena Headey) attempts to convince her to stay and fight, the Queen of Thorns gives my absolute favorite line of the episode, “I wonder if you’re the worst person I’ve ever met.” Burn. This badass grandma is left unswayed, reminding the former queen that maybe, possibly, she’s finally lost.

As for the other Lannister, Jaime (Nikolaj Coster-Waldau), he’s busy trying to parlay with Brynden “Blackfish” Tully, who’s retaken Riverrun. He arrives at the exact right time, as the Freys are there threatening to kill the Blackfish’s nephew, Edmure, if he doesn’t yield the castle. The Blackfish doesn’t bat an eye, cavalierly instructing them to kill his nephew. And the Freys, of course, back down. No blood is spilled here. It’s a hilariously anti-climactic attempt at a siege, and added some much-needed mirth to the episode, reminding us that not all battles end in bloody, epic defeat. Sometimes, it’s just sad and pointless defeat. And not only is the Blackfish not standing down for the Freys, he basically tells Kingslayer Jaime where to go, too. I like this guy.

Up North, Jon (Kit Harington) is in the first stages of his great soldier round up. First order of business, he must convince the Wildlings to fight alongside him. He doesn’t do so well at first, but then Tormund goes to bat for him, reminding them of Jon’s sacrifice — his life. Guilt trip successful, and the Wildlings are officially a go.

Next they attempt to coax the Mormonts, who now have 10-year-old Lyanna as their Lord. Child or not, this girl has some balls. Jon and Sansa (Sophie Turner) struggle to convince the little whippersnapper, but then Ser Davos saves the day, reminding them all that this is not simply a Bolton versus Stark war, but a dead versus living one, and if the North isn’t united, none of them stand a chance against the Night King.

It’s a smart move that secures them a whopping 62 more men. They have less success with Lord Glover, who has no interest in fighting their war. Sansa reminds him of his family’s allegiance to the Starks, and he replies, “House Stark is dead.”

It would’ve been easy for Jon and Sansa to give up there, but they’re moving forward with their assortment of Northern men and Wildlings. However, we do see Sansa writing a letter back at camp, presumably to Littlefinger. This proves her maturity and growth throughout these six seasons, finally swallowing her pride for the greater good.

We leave the North to check up with the Greyjoys, who are now on the run from their uncle Euron. They’ve just made a pit stop to have fun with some prostitutes, Yara especially. She’s another character that I’m finding myself enjoying more and more. She’s crass, determined and highly capable. Her plan is to sail to Meereen, secure an alliance with the Daenerys (Emilia Clarke) and get the Iron Islands back. That’s if her brother Theon can even hold his head up long enough to fight. He’s a truly broken man. But Yara’s bold words of encouragement (and some booze) may be just enough to put him back together. 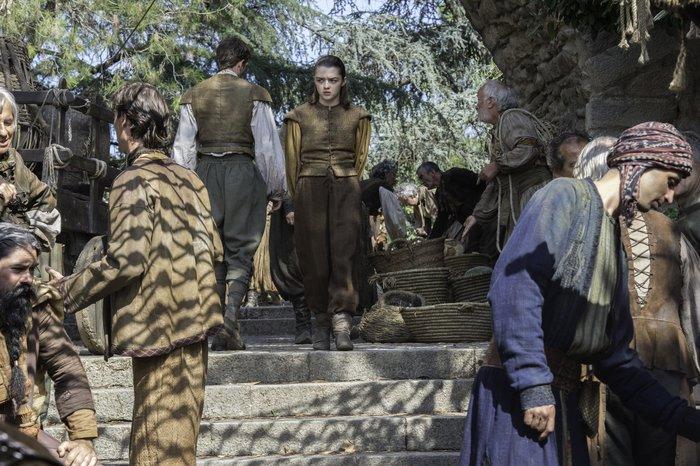 It took almost the entire episode, but Arya (Maisie Williams) finally made an appearance. And what an appearance it was. The third youngest Stark is finally getting the hell out of Braavos. As she awaits her passage, she’s unceremoniously slashed and stabbed in the gut by the Waif in disguise as an old beggar woman. I should’ve seen it coming, but I’ll admit — I didn’t. For a second, I felt panicked. Was another Stark really going to die? Luckily, she tumbles over the side of the bridge and into the river. She’s left wandering the streets of Braavos, soaked and bleeding heavily from her stomach. It’s not even that I’m particularly fond of Arya, I just really don’t want to see ather Stark bite the dust. Please, Game of Thrones, don’t kill her off just yet.

Granted, I usually fast forward through a lot of plot points in my reviews, because in my humble opinion, a lot of them are dead weight. But as you can tell, “The Broken Man” was different. A lot of important, necessary stuff happened in this episode. A lot of pieces to add to the puzzle, a lot of narratives to intertwine and pick back up, and a whole lot of politicking. It was a jam-packed 50-something minutes, which normally I’m exhausted by the end of, but this time around, I felt invigorated. None of the missing pieces felt arbitrary or convoluted, and there was a real sense of calculation and intent to everything. And almost every character felt like they were finally finding their voice, including the Hound, who’s resurrected, recovered, and still unbroken — all with an axe at his side.

Game of Thrones airs Sundays on HBO at 9 p.m. ET/MT. 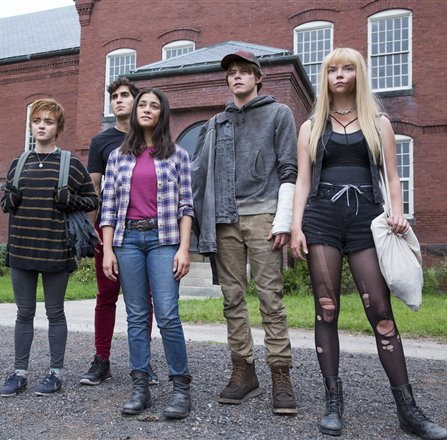