Game of Thrones S6 E9 review: Battle of the Bastards 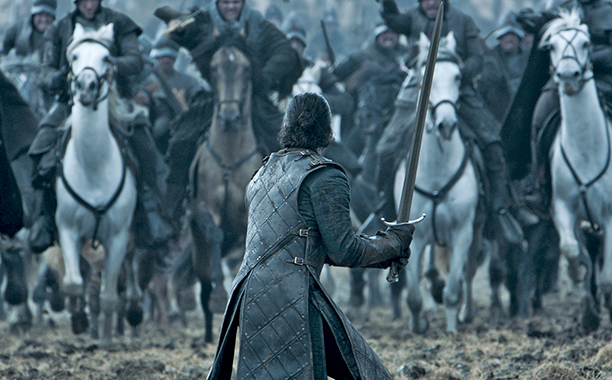 This is the greatest single episode of Game of Thrones of all time.

In all great storytelling there is setup and payoff. Most shows deliver justice. Game of Thrones is an exception. Game of Thrones has been hailed as bold and even revolutionary for denying its viewers the payoff they so often crave. Every law of conventional storytelling was begging for Robb Stark (Richard Madden) to avenge his father’s death. Instead we got the Red Wedding. Oberyn Martell should have defeated the Mountain, which is what made the Mountain’s brutal victory so much more perverse.

I think there’s a small part of most of us — especially those of us who watch the show — that likes perversion. A part of us enjoyed Ned Stark’s (Sean Bean) unexpected beheading, the Red Wedding and Shireen Baratheon’s sacrifice to the Lord of Light. It’s the same reason Shakespeare’s most violent plays were the most popular during his lifetime.

The fact that Game of Thrones has been raking its characters through the mud for six years made last night’s episode all the more satisfying. The suspense was there because the viewers are genuinely unsure of what will happen. Ramsay (Iwan Rheon) could have murdered Sansa (Sophie Turner) in front of Jon’s (Kit Harrington) eyes. Anybody could have died, really. A television series that has never delivered justice to its villains finally delivered.

We begin in Meereen where the slave masters of Astapor and Yunkai have launched a siege against the free city. Queen Daenerys Stormborn (Emilia Clarke) has finally returned to the city after being presumed missing or dead. The unexpected return of the Queen has tipped the odds in favor of the Meereen. After all, Daenerys has returned with Drogon, her gigantic fire-breathing dragon. The slavers agree to negotiate with the Queen. Daenerys brings Tyrion (Peter Dinklage), Missandei and Grey Worm along. When the slavers give their terms of surrender, Dany tells the slavers it is them who will surrender. She then calls for Drogon, mounts him, and instructs him to burn the slaver’s fleet.

Tyrion tells the slavers that one of them must die. Of the three slavers, one is deemed “low-born” by the other two. The low-born begs Grey Worm not to kill him, and Grey Worm surprisingly agrees. Instead, Grey Worm slits the throats of the two “high-born” slavers. In typical bad ass fashion, Tyrion tells the surviving slaver to sail home and tell the other slavers what happens when you mess with Daenerys Stormborn.

After securing a victory, Daenerys gets more good news. Theon and Yara Greyjoy have arrived with a fleet of 100 ships for Dany. The Greyjoys want to form an alliance with the Queen. Daenerys and Yara have a lot in common. Both had fathers who were horrible Kings, and both want to be the first women to rule their respective kingdoms. I could have sworn I saw some sparks fly between Yara and Dany. I guess you could say I… SHIP them. Hahaha, get it? Ship. Because they’re like, from the Iron Islands and they have ships… never mind.

One last thing about our dear Khaleesi. When she tells Tyrion she wants to burn Yunkai and Astapor to the ground, he reminds her that her father wanted to do the same to King’s Landing. Tyrion also reminds her that she’s talking about murdering innocent citizens. I had chills. Will Daenerys kill ruthlessly when taking over Westeros? I’d be fine with her burning Cersei (Lena Headey) alive, but what about Brienne of Tarth? As the show comes to a close, I fear we as viewers may be faced with no-win scenarios.

Daenerys forms a pact with Yara Greyjoy and recognizes her claim to the Salt Throne. Looks like Euron Greyjoy is too late.

And now for the battle we’ve all been waiting for. Let’s get ready to rumble (or rubble!). 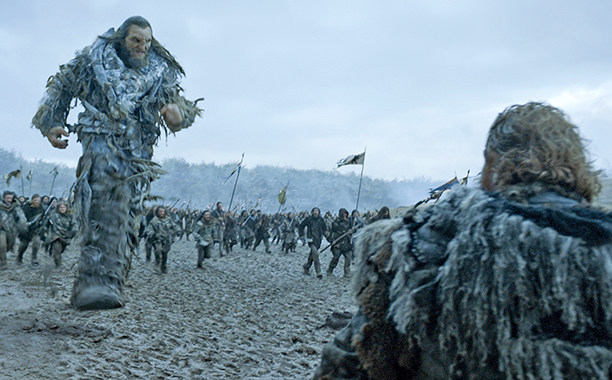 If you’ve been watching the show you know exactly who is fighting who. Jon Snow, House Mormont and the Wildlings take on House Bolton in the battle for Winterfell.

The night before the battle Jon, Sansa, Tormund and Ser Davos (Liam Cunningham) meet up with Ramsay and the Bolton banner men. Ramsay tries to intimidate Jon by presenting him with the decapitated head of Rickon’s direwolf. Jon courageously asks to fight Ramsay one-on-one, but Ramsay declines. Wise move Ramsay. I also found it curious that Ramsay kept calling Jon “bastard.” It didn’t seem to phase Jon. It probably had more to do with Ramsay feeling insecure about being a bastard.

Sansa tells Ramsay: “You’re going to die tomorrow,” and the two parties return to their respective camps. It is there that Ser Davos begins to piece together what happened to his dear friend Shireen.

The battle begins when Ramsay asks Rickon to sprint from the Bolton’s army to the Stark’s army. Rickon runs in a STRAIGHT LINE while Ramsay tries to hit him with arrows. Are you kidding me Rickon?! Run in a zig zag! I thought your father was a warrior! I thought you were being cared for by a wildling! Common Rickon, even the most primitive animals have evasive instincts.

Rickon is shot dead by Ramsay’s arrow, and the bloody battle begins.

The battle is the most impressive I have ever seen on television. It isn’t even television, it’s pure cinematic wonder. I’ve always been a sucker for military history and I was geeking out when I saw the Bolton phalanx. Game of Thrones has officially raised the bar for what can be done in the television medium. I wouldn’t be surprised if this episode wins an Emmy. It will be seen as a turning point in the history of television.

Just when the Stark forces are at their most decimated, the Knights of the Vale arrive just in time. Sansa wrote to Lord Baelish in the previous episode, and he and his men show up just in the nick of time. The Bolton phalanx was absolutely OWNED by the Knights of the Vale. It was the most satisfying thing I think I’ve ever seen. 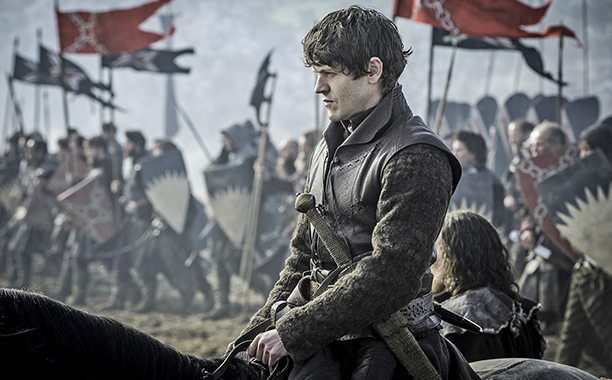 Ramsay tries to hide in Winterfell and thinks he’s safe when his men seal the doors, but Wun Wun the Giant is all like: NOPE! He rams through that shit, and Jon Snow’s forces come flooding into Winterfell. Sadly, Wun Wun took one too many arrows, and falls to his heroic death. The last known giant, gone forever. Jon Snow is pissed y’all. Ramsay tries to hit Jon Snow with arrows, but better archers than Ramsay have failed to kill Jon. Jon brutally punches Ramsay in the face, but decides that Sansa should end him.

Are you kidding me?! How is that not the greatest SINGLE episode of Game of Thrones of all-time. Other episodes have great moments, but if I had to pick a self-contained episode that would satisfy both fans and n00bs alike, it would be this one. Think about it, even if you’ve never seen the show, you still have emotional anchors. You still know what everybody’s motivations are. Everything is explained. You don’t need to have seen every episode to feel sad when Rickon or Wun Wun dies, or to feel satisfied when Ramsay dies. If you’ve been meaning to get into Game of Thrones, just start with this episode and keep watching.