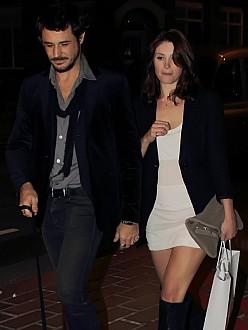 Gemma Arterton has reportedly split from her husband. The Quantum of Solace star is said to be "devastated" after her two-year marriage to Stefano Catelli came to an end, and friends claim the pair went their separate ways a "couple of months ago." A source told the MailOnline website:"It's sad, but her marriage is over. Gemma thought Stefano was the one. He really wore the trousers in the relationship, such was her devotion to him. It happened a couple of months ago. It was a mutual decision." However, friends believe the 27-year-old beauty - who began dating Stefano, 40, in 2009 - won't have to stay single for long once she is ready to move on. Another source said: "Gemma's gorgeous and there are scores of men who will be begging her for a date. But she's in no rush to move on." Gemma has been spending time with her friend Bradley Cooper, 38, enjoying an evening at London's Rose club after a Silver Linings Playbook party on Friday, and spent Saturday at a pre-BAFTA party at the city's nightspot Annabel's.