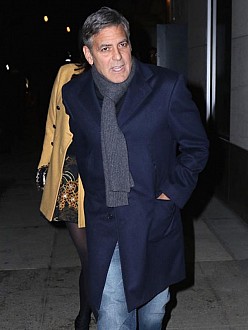 The 54-year-old actor is currently working on thriller movie Money Monster, and has becomes interested in the soccer team after spending time with co-star Jack O’Connell, who is constantly watching the games.

A friend of Jack’s explained: ”Wherever Jack is in the world he is tuning into Derby County matches and he is a vocal supporter so inevitably Clooney became interested in Jack’s football moods.”

However, the Tomorrowland star – who married lawyer Amal Clooney last year – has been less than impressed by the team, nicknamed the Rams, due to an unfortunate losing streak which has left Jack, 24, feeling ”miserable.”

The source told The Sun: ”He’s watched a few games but he’s not exactly picked a great time to come on board — the results have been miserable and Jack even more so.”

The news comes just a year after Jack revealed his intentions to get the Hollywood star feeling enthusiastic about the team, having previously persuaded ‘Unbroken’ director Angelina Jolie to wear the team’s scarf.

He joked at the time: ”I just want to take him to a game now. I’ll need to see if he can say, ‘Ay up me duck’ better than Angelina now.”