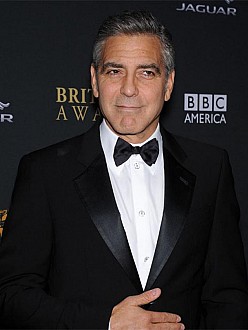 George Clooney may wed at the country house where Downton Abbey is filmed. The Oceans Eleven star whisked his fiancée Amal Alamuddin away for a romantic break in the English countryside this week and took in Highclere Castle near London - where the period drama is filmed - and she was so taken by it, they made enquiries as to whether it could be used for their wedding. A source told MailOnline.com: ''George became close friends with Hugh Bonneville, who plays Lord Robert Crawley, when they did 'The Monuments Men' together last year. And they really hit it off. He contacted Hugh and asked him to arrange a private tour of the castle. Amal was blown away. When he saw his bride-to-be's reaction to the spectacular Victorian castle, set on 1,000 acres of parkland, he began making some discrete inquires about having their wedding performed there. And he was told they would be most happy to accommodate them.''

Highclere is thought to be a good venue for the wedding as it is close to London and also to Heathrow airport, meaning George's family from America can easily fly, as can Amal's extended family who live in Dubai and Lebanon. The castle is currently inhabited by the 8th Lord and Lady Carnarvon and their family and allows weddings, with prices to hire parts of the castle starting at $23,000 for a day.