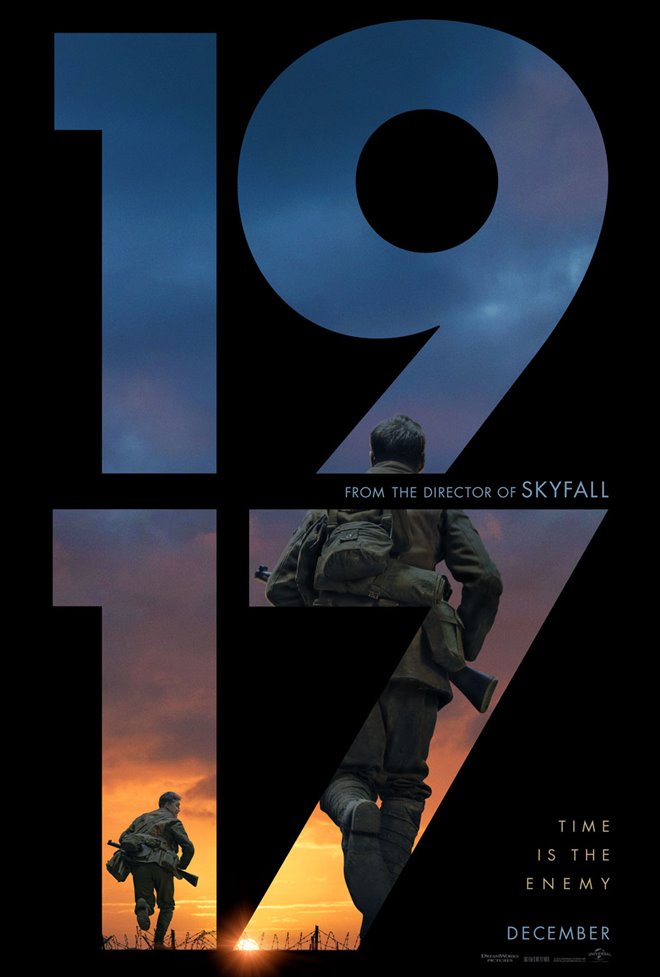 Created to play out as a real-time, one-continuous-shot narrative, 1917 is a compelling and immersive cinematic experience. It’s an ambitious First World War film that’s layered with humanity and fiercely delivers a story of courage and sacrifice in the trenches.

Young British soldiers Lance Corporal Schofield (George MacKay) and Lance Corporal Blake (Dean-Charles Chapman) are stuck with 1,600 other British soldiers in the trenches of the Hindenburg Line on April 6, 1917. General Erinmore (Colin Firth) assigns the two soldiers to be messengers and personally deliver a letter to Col. Mackenzie (Benedict Cumberbatch), commander of the 2nd battalion.

It’s an urgent situation, because the letter contains orders not to proceed with a planned attack from the front, as they would be walking into a German trap. The young soldiers have to cross No Man’s Land in Northern France and cross into enemy territory to save the lives of thousands of men — one of them being Blake’s brother.

Directed by Sam Mendes, who also co-wrote the script with Krysty Wilson-Cairns, 1917 is a heart-pounding adventure, packed with adrenaline and edge-of-your-seat shots as the camera does not leave these two men. The cinematography is incredible, immersing you in the experience as if you really were walking with the soldiers every step of the way, and living at the heart of all the action. The locations are never repeated and the set pieces are unbelievable.

From man-made trenches to dangerous rivers to booby traps and bombs, the fear and dread is amplified from scene to scene. Mendes’ decision to opt for a single-take technique, although tricky, is really what makes the film such a rewarding watch in theaters. He pulls us into the horror and brutality of World War I as we witness the carnage in war-torn zones, making us see the raw reality. Cinematographer Roger Deakins has his work cut out for him as he keeps the camera on these soldiers and their journey from start to finish, without noticeable edits or cuts in the frame.

But it’s not just the technical aspects that make this film an ambitious and shocking story. MacKay and Chapman carry the weight of this film on their shoulders. They emote fear and innocence, but their characters’ courage and sacrifice in the face of adversity is so well-portrayed that it leaves us feeling so many emotions. As far as war films go, this one left me in awe of what the team brought to the screen. It has all the essential ingredients checked off the list — from stunning visual effects and production design to heart-pounding cinematography, direction and screenwriting, the movie is a cinematic thrill.

Sam Mendes just nabbed the Best Director award at the Golden Globes and the film won Best Picture, Drama. It’s an award season favorite and is definitely on its way to the Oscars. 1917 opens wide on Friday. If you have seen the film and would like to review it, click here. Watch our interviews below with George MacKay, Dean-Charles Chapman and screenwriter Krysty Wilson-Cairns. ~Marriska Fernandes