Box Office > Guardians of the Galaxy take over the box office 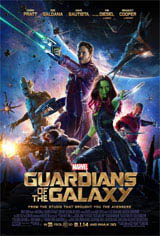 Audiences were hooked on a feeling and high on believing in Guardians of the Galaxy, which features a number of musical hits from the 1970s. It took in $94 million its opening weekend at the box office. Tribute viewers felt the same way, giving the movie 4.4 stars. Fighting for the second spot was Lucy, which took in $18.3 million for a two-week total of $79 million. Tribute viewers gave the flick 3 stars. Tribute viewers indeed got on up and rated Get on Up at 4.1 stars. The bio pic opened strong its first week at the box office in third place, making $13 million. Hercules is continuing his legendary struggle, coming in fourth at the box office with $52 million. After two weeks the Dwayne Johnson film has remained in strong standing with Tribute viewers who gave it 4.1 stars.

After four successful weeks at the box office for Dawn of the Planet of the Apes, it has begun to drop, landing in fifth with $8.7 million. Tribute viewers went ape for the movie, rating it at 4.4 stars and the flick has made a total of $189 million.
~ Andrea Hodgins