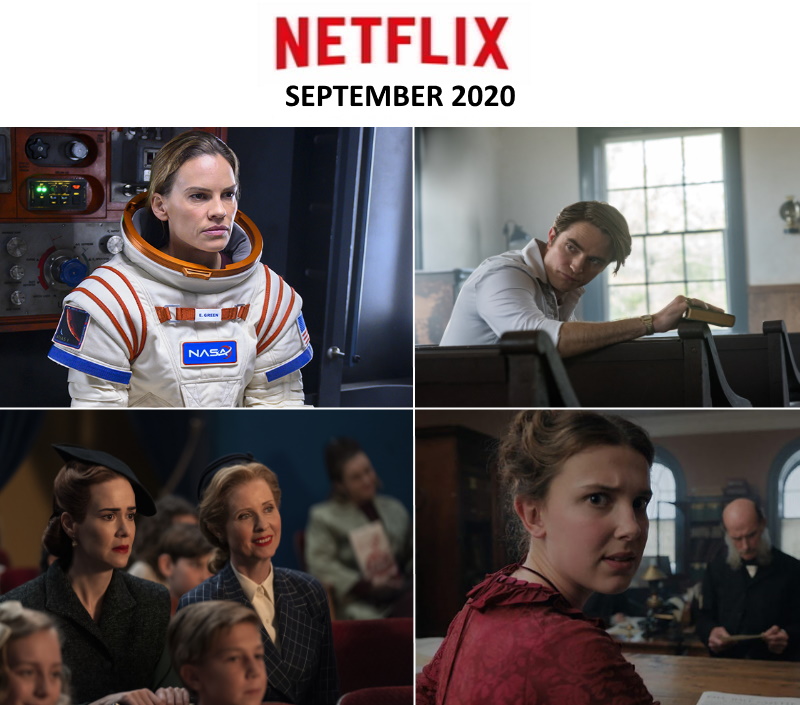 As we move into fall, we can expect less summer rom-coms, and more action, drama and psychological films and series to keep you entertained while you’re safely working from home. From Ryan Murphy’s new series to Robert Pattinson’s latest feature film to Hilary Swank’s mission to Mars series, the September slate looks promising. Here’s your New on Netflix September guide! 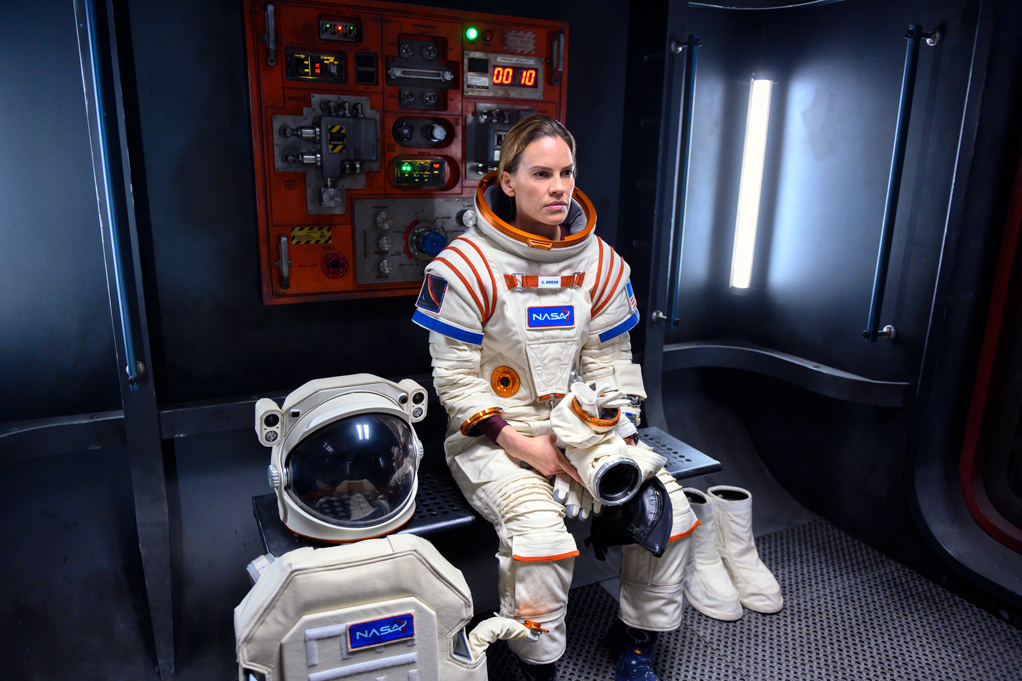 She’s an American astronaut, but she also struggles with leaving her husband and daughter behind to embark on a dangerous mission with an international space crew. Hilary Swank takes viewers on an intense journey in the series, Away (Sept. 4).

An unsettling new Charlie Kaufman movie also comes to the streamer this month, titled I’m Thinking of Ending Things (Sept. 4). Nothing is as it seems when a woman experiencing misgivings about her new boyfriend joins him on a road trip to meet his parents at their remote farm.

A new star-studded psychological thriller The Devil All The Time (Sept. 16) is an explosive Midwestern Gothic tale spanning two decades that revolves around a group of people whose lives all intersect. The film stars Tom Holland, Robert Pattinson, Bill Skarsgård and Haley Bennett.

Ryan Murphy is ready to roll out another one of his creations on Netflix. Ratched (Sept. 18) is a dramatic prequel to One Flew Over the Cuckoo’s Nest, which follows the infamous character Nurse Ratched (Sarah Paulson) as she begins work at a psychiatric hospital.

Sherlock Holmes’ teen sister comes to the rescue in Enola Holmes (Sept. 23). When Enola Holmes (Millie Bobby Brown) discovers her mother is missing, she sets off to find her while outwitting her famous brother and unraveling a dangerous conspiracy.

Is love ever guaranteed? Well, depends who you ask. In the new Netflix film Love, Guaranteed (Sept. 3), a dating website guarantees love, so Nick (Damon Wayans Jr.) sues the site for failure to meet their guarantee. Small law firm owner and lawyer Susan (Rachael Leigh Cook) takes on his case.

Have you seen The Babysitter, which premiered on Netflix two years ago? Now there’s a sequel. The Babysitter: Killer Queen (Sept. 10) takes place two years after Cole defeated a satanic cult led by his babysitter Bee. He has to forget his past and focus on surviving high school, until old enemies return. 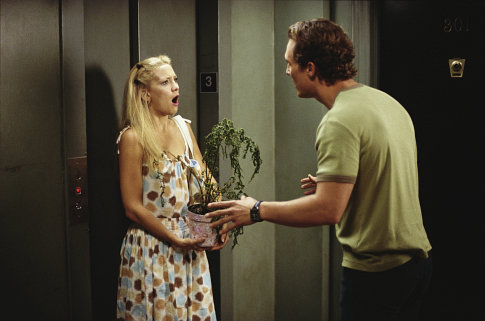 (Sept. 1), a rom-com we love is also back on Netflix! Does a faux relationship based on deception stand a chance in a world where everyone says they’re looking for honesty? Kate Hudson and Matthew McConaughey make this a rom-com to remember.

Bewitched (Sept. 1), the 2005 big-screen reboot of the popular 1960s TV series, stars Nicole Kidman as a naive, good-natured witch who’s determined to give up her supernatural powers and lead a “normal” life, when she meets Jack Wyatt (Will Ferrell), an actor trying to get his career back on track. Aren’t we all looking for a “normal” life now? This one is a comedy we’d love to watch again.

For more of Will Ferrell, how about Daddy’s Home (Sept. 1)? Mark Wahlberg and Will compete for their kids’ affection in this hilarious comedy. 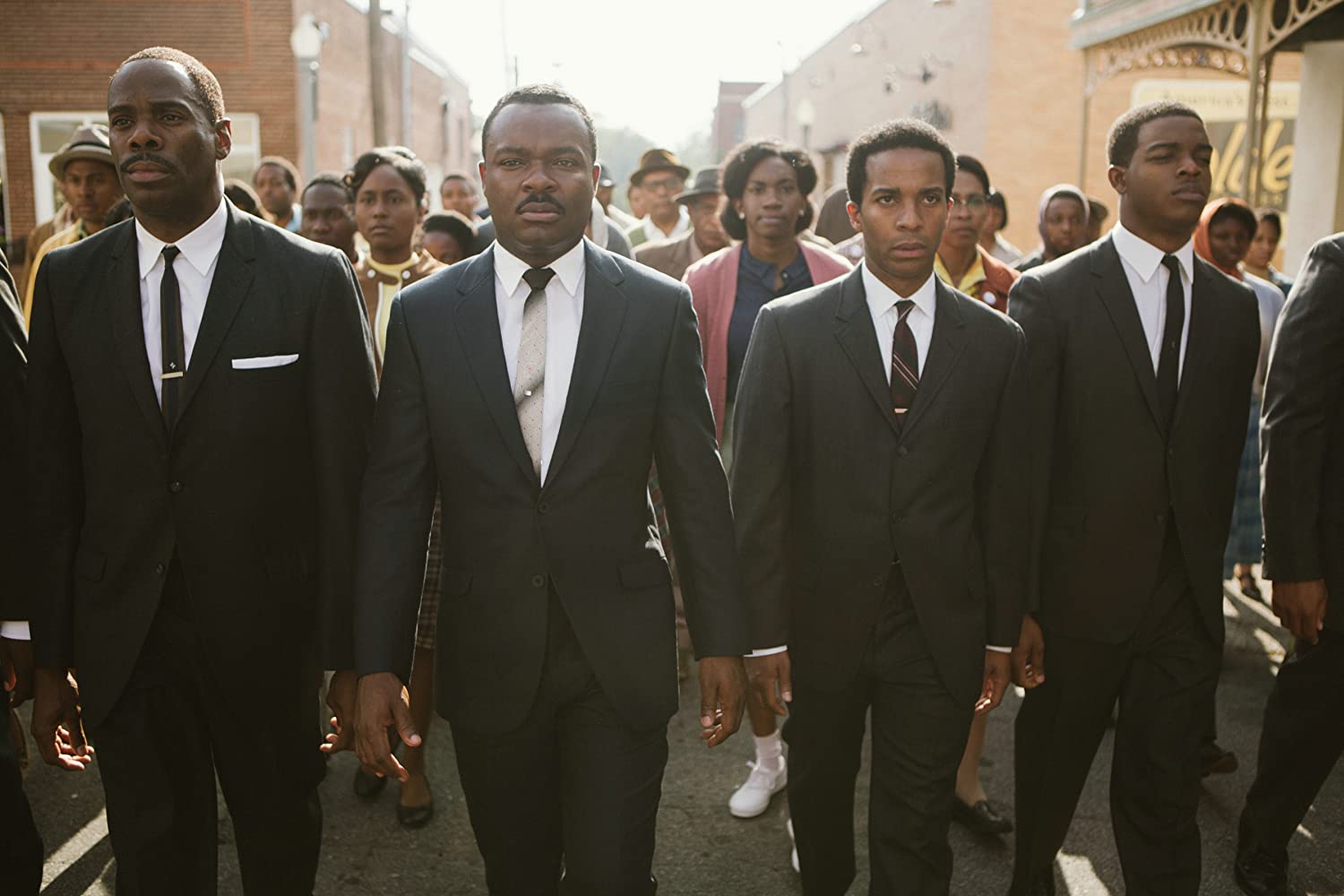 Oscar-nominated film Fences (Sept. 1) is another one we recommend. The film earned Denzel Washington a Best Actor Oscar nomination, while Viola Davis won the Oscar for Best Supporting Actress. Based on August Wilson’s Pulitzer Prize and Tony Award-winning play, Fences follows the life of a working-class African-American family in the 1950s.

We highly recommend Captain Phillips (Sept. 1). It’s based on the true story of Captain Richard Phillips and the 2009 hijacking of the U.S. container ship Maersk Alabama, the first American cargo ship to be hijacked by pirates in two hundred years. Tom Hanks and Barkhad Abdi gave award-winning performances — the film is one to watch.

Steven Spielberg earned an Oscar for Saving Private Ryan (Sept. 1), which also stars Tom Hanks. Amid the chaos and terror of those days in early June 1944, this remarkable story searches to find decency in the sheer madness of war.

For a more in-depth look at the originals hitting Netflix this September, click here to scroll through our What’s New on Netflix September 2020 photo gallery.

Have a safe and streaming September! ~Marriska Fernandes

See below for everything coming to Netflix this month and continue scrolling for what’s leaving as well.

Sept. 24
The Chef Show: Season 2 – Netflix Documentary
This Is Us: Season 4