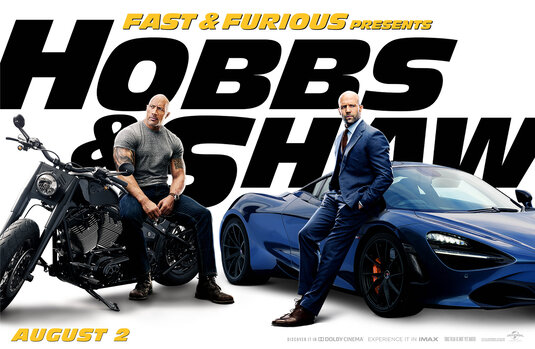 Taking the crown from last week’s top movie was Fast & Furious Presents: Hobbs & Shaw. The spin-off to the successful franchise was a runaway success, debuting with a three-day haul of $60.8 million.

Having enjoyed two weekends in the top spot, The Lion King was bumped to second, earning an additional $38.2 million this weekend. The film now stands at $430.9 million domestically and has already surpassed $1 billion worldwide, heading into its third week.

Quentin Tarantino‘s Once Upon a Time in Hollywood dropped a spot to third, earning an extra $20 million in ticket sales. Starring Leonardo DiCaprio and Brad Pitt, the film now has a domestic total of $78.8 million.

Spider-Man: Far from Home also dropped a spot, landing in fourth place and pulling in $7.8 million in its fifth weekend in the top five at the box office for a domestic total of $360.3 million.

Rounding out the top five was Toy Story 4, which took in an additional  $7.2 million in its seventh weekend. The animated film has earned $410.1 million domestically and close to $1 billion worldwide. ~Emily Chavez