ALL THEATRES ARE CLOSED UNTIL FURTHER NOTICE, DUE TO COVID-19.
Celebrity Gossip > Jennie Garth is engaged 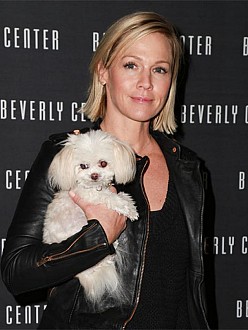 The 42-year-old actress’ boyfriend made the ”perfect” proposal around her birthday on April 3 and a delighted Jennie had no hesitation in saying ”yes.”

A source said: ”Dave had been working on this for months, and really wanted to plan something special for her around her birthday and make it perfect.”

The couple’s happy news has been confirmed by their representative to PEOPLE. Jennie and Dave have been an item since last autumn and have been virtually inseparable since they got together. The marriage will be Jennie’s second time down the aisle.

She was previously wed to Peter Facinelli – with whom she has three children, Luca, 17, Lola, 12, and Fiona, eight – but they split in March 2012 after 11 years of marriage.

Jennie Garth is dating drummer Jeremy Salken.The ‘Beverly Hills 90210’ actress is reportedly smitten with the Big Gigantic musician and recently attended one of his concerts where she couldn’t contain her excitement once he took to the stage. A source…

Jennie Garth has tried to reconnect with Amanda Bynes.The 40-year-old actress – who recently realized she is not ready to date following her split from husband of 11 years ‘Breaking Dawn: Part 2’ actor Peter Facinelli – claims she is desperately conce…

Jennie Garth has reportedly moved on with another new man.The ‘Jennie Garth: A Little Bit Country’ star – who recently lost an estimated 30 pounds following her split from husband of 11 years and the father of her three daughters Peter Facinelli – was…