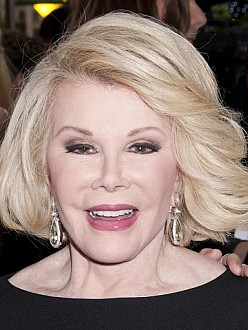 Joan Rivers wanted Meryl Streep to cry at her funeral ”in five different accents” and paparazzi to ”make a scene.” Rivers passed away ”peacefully” yesterday (04.09.14) aged 81, but before her death she revealed plans for a glitzy funeral that would see the Hollywood actress sobbing and photographers and publicists at loggerheads. In an extract from her 2012 book entitled I Hate Everyone … Starting with Me, Joan – who leaves behind her only child, Melissa, 46 – wrote: ”When I die (and, yes, Melissa, that day will come; and, yes, Melissa, everything’s in your name), I want my funeral to be a huge showbiz affair with lights, cameras, action….I want Craft services, I want paparazzi and I want publicists making a scene! I want it to be Hollywood all the way. I don’t want some rabbi rambling on; I want Meryl Streep crying, in five different accents. I don’t want a eulogy; I want Bobby Vinton to pick up my head and sing ‘Mr. Lonely’.”