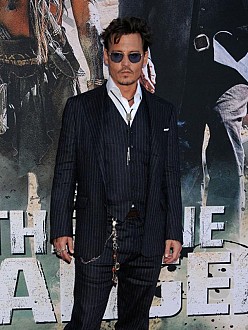 Johnny Depp, 50, laughed and showed off a diamond on his ring finger when quizzed as to whether he and girlfriend Amber Heard are planning to marry. Asked if they are engaged, he lifted his hand to show the ring and said: ''The fact that I'm wearing a chick's ring on my finger is probably a dead giveaway. Not very subtle.'' However, Johnny - who has children Lily-Rose, 14. and Jack, 11, with ex-partner Vanessa Paradis - will leave planning their nuptials to the 27-year-old actress. Speaking in Beijing during a promotional tour for his new movie Transcendence, he said: ''I think that I would be better at making women's shoes than I would be at wedding planning, I can't plan anything. I'm really bad at that stuff.'' Johnny and Amber were first reported to be engaged in January, and it has been claimed the actor proposed to his Rum Diary co-star just before Christmas. A source said recently: ''It happened on Christmas Eve (12.24.13). Amber really took her time to make up her mind ''She turned him down before ... before she said yes. So she waited and was thinking about it for a long time.''