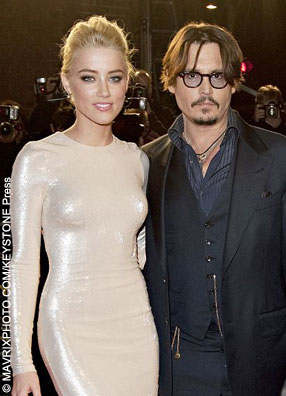 Johnny Depp and Amber Heard recently got back together after he agreed to cut back on his alcohol intake at her request, and it seems the Pirates of the Caribbean star has already popped the big question. An insider told the National Enquirer that Johnny proposed to his girlfriend on her birthday [April 22]. “They’re not announcing it until the end of the year, but she and Johnny are now on the hunt for a vintage one-of-a-kind ring.” The couple, who met while shooting the movie The Rum Diary, split up for a time, but were confirmed to be back together when they were seen holding hands at a Rolling Stones concert last month. Amber, who has had a crush on Johnny since she was a teenager, wanted more commitment from the actor and if this report is true, she has gotten her wish. The two also reportedly moved in together just a couple weeks ago. Congratulations Johnny and Amber! ~ Rebecca Raveendran