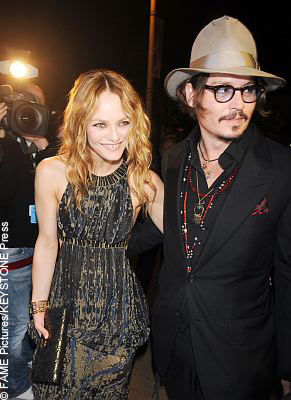 Johnny Depp‘s romantic future is looking considerably less bleak these days. E! News reports the actor is trying to work on his relationship with French singer/actress, Vanessa Paradis, whom he was involved with for 14 years. While he’s filming The Lone Ranger in New Mexico right now, he’s been returning to Los Angeles every weekend to spend time with his 39-year-old love and their two children. “For the first time in a long time, he is talking about her,” says a source. “They both want to make it work.” Both Depp and Paradis have remained silent about their relationship since rumors started circulating of a split in January. Paradis even reportedly skipped out on their son’s 10th birthday party because he would be there. Depp was last linked to his Rum Diary co-star, Amber Heard, after photos surfaced of them taking his private plane to CinemaCon last month. Heard, however, is said to still be dating her long-term girlfriend, Tasya Van Ree. ~Kyle Sharp