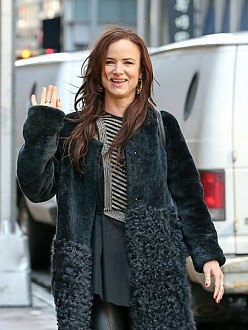 Juliette Lewis has paid tribute to her ”hero” father following his death.

Actor Geoffrey Lewis died of natural causes aged 79 yesterday and the Natural Born Killers star has vowed he will ”never” be gone.

Juliette, 41, also thanked fans for their support and messages of condolence.

She tweeted: ”I cant say the words. No amount of tears will wash it away. Thank u for your out pouring support. Life is love and love never dies.”

The San Diego-born actor racked up over 200 acting credits during his career, after rising to prominence in the Clint Eastwood movies High Plains Drifter, Thunderbolt and Lightfoot, Every Which Way But Loose, Any Which Way You Can and Midnight in the Garden of Good and Evil.

Other films in which he starred included The Devil’s Rejects, Heaven’s Gate and Dillinger, while his TV work was also acclaimed, featuring in Barnaby Jones, Hawaii Five-O, Little House on the Prairie and Murder She Wrote, and received a Golden Globe nomination for his role in the 1980 series, Flo.

Most recently, Geoffrey had been shooting sport drama High and Outside, although it is not now known what will happen to the production.

He is survived by his second wife Paula Hochhalter and his 10 children, including Juliette as well as Lightfield, Matthew and Dierdre, who have also embarked on careers in acting.