You’ve undoubtedly seen British actor Kevin McNally in many movies and on many TV series. He played Joshamee Gibbs in the Pirates of the Caribbean movies; he had a recurring role on the Netflix series Designated Survivor starring Kiefer Sutherland and a regular role on all four seasons of the AMC series Turn: Washington’s Spies, starring Jamie Bell. He also played Frank Devereaux on Supernatural and Horace Bryant (the gruff grandfather of Ethel’s illegitimate baby) on Downton Abbey.

On the third season of the ITV crime series Unforgotten, about two police detectives who solve cold cases, he played a father whose son is going through a self-identity crisis, which he believes may be linked to the disappearance of a girl many years earlier, whose bones are suddenly found.

I had the opportunity to chat with Kevin about his role on the third season of Unforgotten, which debuted May 1st on the streaming service BritBox, as well as his many roles in American productions and also about what he and his wife, Phyllis Logan (Mrs. Hughes on Downton Abbey) are doing during the coronavirus pandemic. ~Alexandra Heilbron

Great show, I really enjoyed the first two seasons and I was so happy to hear there’s a third season. Had you seen Unforgotten prior to being cast on it?
No, but I knew of it, and I knew the writer and the regular actors. Of course, [series creator/writer] Chris Lang’s writing is so great and the characters — particularly the guest characters — are so well-rounded and such a joy to play that I was really pleased that they thought of me. And I certainly am a viewer now. I caught up with all the earlier shows.

Will there be any more seasons of the show?
They filmed another season last year and I think they had to break off the [latest] season this year due to the coronavirus, because I keep in touch with Andy Wilson the director, he lives in Denmark and he suddenly had to go back to Denmark.

What memories do you have from filming?
Very happy memories, it was a lovely summer and the amazing thing is that the four suspects, the four guys that I played with, have all been friends of mine for 30 years, you know, so it was like a party really. And I knew the regulars from various things so it was a very friendly, enjoyable experience for me. And it’s always nice to film in London. I mean, I do like going away and traveling, but those times when you can stay in your own bed and get picked up at some ungodly hour and go to another interesting part of the city that you might not know, it’s always a thrill.

When you were cast on the show, did you get all the scripts for the whole season at once, or did you get them one at a time?
Oh, I got all of them, yeah.

So you knew who the murderer was before filming?
Yeah. That’s imperative, of course. Particularly because this season, with the other problems or other secrets or other troubles that the characters were having, they all appear to have a motive to be the murderer. So, one had to be very clear in your mind about why you don’t go and start behaving suspiciously. You have to know what it is you’re trying to cover and why you’re not being completely frank and why you’re changing the events a little bit. So that was very important to know.

You play a father who’s going through a rough patch with his son. As a father in real life, were you able to relate to that insofar as every parent has a slightly more difficult job after their children become teenagers?
Yeah, not to the extent that my character did, but of course, any similarity in your life, however tenuous that you can have with a character, is most helpful in filling in those gaps and then the bit you don’t have, you research, really. I know what it’s like to have children; I know what it’s like to have children to be slightly wayward at times but I’m really glad that I’ve never had to suffer, you know, a child in such torment. And particularly as part of the story is that my character feels very responsible for many of his problems through disbelieving him. Because as you know, my character highly suspects that he did it.

At Magic City Comic Con in 2017, you said you were enjoying living and working in America. You are living in England now of course, but what differences…
Yes, I am a U.S. resident, but that’s sort of meaningless to an actor because I go where the work is and frequently, it’s not in America. I did do four seasons of a series in Virginia but many of the other TV shows that I’ve done have been in Toronto or Vancouver. I of course shoot a lot of period work, which tends to get shot in Eastern Europe, but I spend whatever time I can in America. I mean, legally, I have to spend a lot of time in America. The conventions are a great help. I love doing those and they give me a very good reason for going over and traveling and seeing all of America, not just L.A. and New York.

Do you bring the whole family with you when you’re working in the States or in Canada?
No, because my wife is very busy as an actress herself and my son’s got other fish to fry now that he’s 23. I mean, if I’m there for a very long time, like shooting a series, I’ll get visits from all of them. They’ll fly out for a few weeks here and there. But it’s always been, ever since we met really, right from the beginning we’ve always had lots of time apart. So we’re sort of used to it, really. In fact, somebody asked me this the other day: “How does your wife feel about you being away so much?” And I said, “Believe me, there are many women in this world who wish they saw their husbands as little as she does.” (laughs) So we try to make the best of it.

What differences do you find between working in the States and working in England?
The only difference is that we have more time in England. We have less advertising, so an hour [show] is often nearly a full hour, [whereas a show is] about 46 minutes on North American television. We will traditionally shoot an [hour-long] episode in 11 days and in America, it’s seven to eight days. Which comes as a hell of a shock to you and is certainly more of a shock to the crew than it is for me, who’s usually just in and out, doing two or three days a week, so I don’t complain about that too much. But that’s the only real difference. The practices and the feel of the set are exactly the same.

Did you have any upcoming productions that were delayed due to COVID?
Yes, I was about to shoot a small independent film but that’s been delayed now. I think the worst thing, just like for anybody really, it’s not having something in your mind where you go, “Oh, I know where this is going.” We don’t know where this is going. I’m quite bleak about it because I think particularly in our industry it will be a long time before they find ways of getting so many people crammed together to do television production, certainly theatre. But I trust in time we will all find a way.

What are you and your family doing to stay busy during quarantine?
We’re lucky that we have quite a large house, so we haven’t killed each other yet, which is I think the major achievement. And fortunately, just before the lockdown came I set up some recording equipment in my study and so when COVID started, all these companies started sending out stuff to our voice agents. So Phyllis is now voicing a TV program called The Highland Vet and I’m doing one for The Smithsonian Channel called Combat Ships, very boyish thing isn’t it? Big boats. And this week I’m going to voice a one-off beautiful CGI documentary by The Smithsonian Channel called Mysteries of the Ice Age Giants. A sort of analysis of why all the woolly mammoths and sabre-toothed tigers, you know, all went extinct during the last Ice Age. So that’s fun, and you learn something.

Really, as far as the rest of it goes, we’re having to cook a great deal more than we used to (laughs), reading a lot of books, watching a lot of TV that I need to catch up on, films. We’re actually very excited, me and my son today. Just before COVID started, this very nice Texan man came over and started to open a real Tex-Mex restaurant, probably one of the few in London. He obviously can’t open the restaurant yet, but he’s starting take-away tonight. So it’s going to be a fun evening of quesadillas and brisket tacos.

Season 3 of Unforgotten is now playing on BritBox. 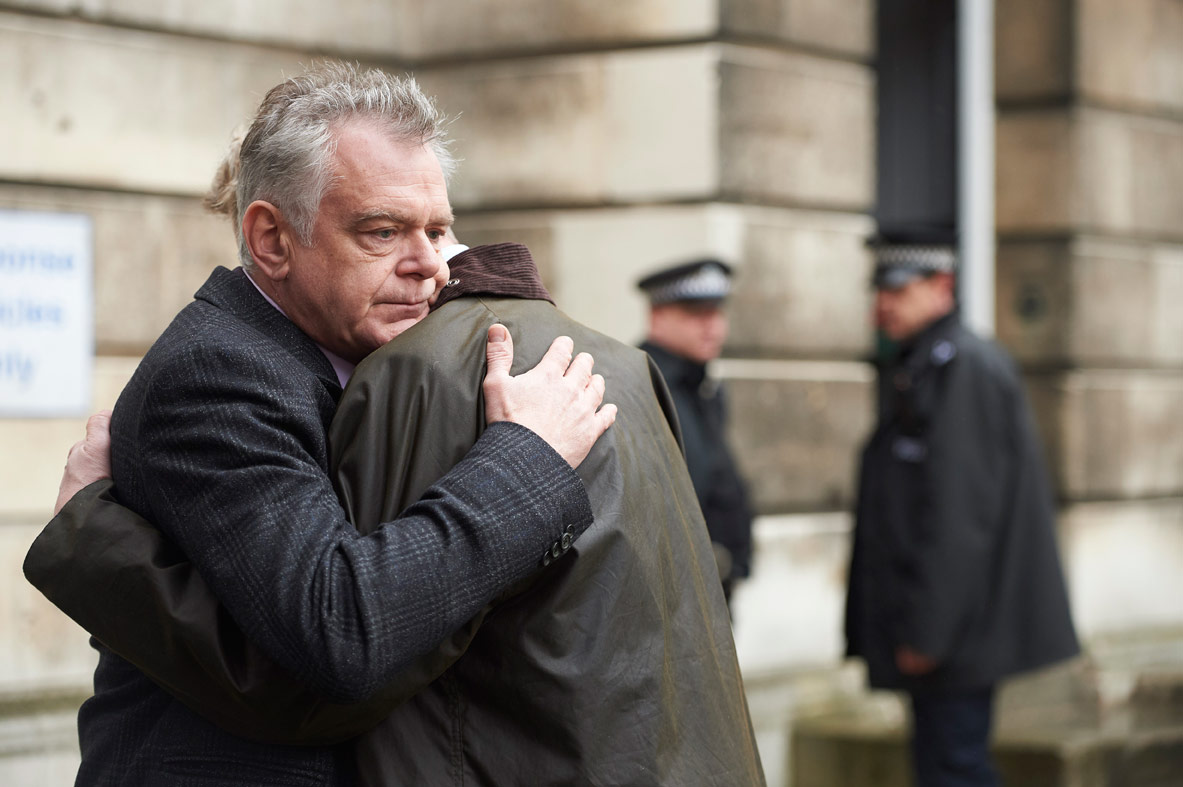